It seems I am trying to be gross with some of my recent posts but really . . it’s just life around here.

First, I’ll give you a little much needed, and I’m sure – much appreciated, lesson on the life cycle of a mealworm!  🙂

When I order them, they arrive as the larva, or the “worm”. That is the stage at which I feed them to the chickens or bluebirds. Before they were larva, they were eggs . . tiny little eggs, about the size of a speck of dust. I can say that I’ve never seen an egg . . the mealworm beds are full of them but I just never see them.

The eggs hatch out in 1 to 4 weeks, then they’re larva (worms) for 8 to 10 weeks. Then, for my purposes, they’re pretty useless, aggravating and nasty!

Then it turns into the grosses, weirdest looking little pupa. I feel sorry for the thing. No mouth, no butt, doesn’t eat, can wiggle a bit but it just sits there .. for 1 to 3 weeks and then it turns into a darkling beetle . . which I really detest. When they’re a few weeks old, they begin to mate, lay eggs and the process begins anew. The adult beetle can lay hundreds of eggs. So, I need the beetles in order to get baby mealworms.

But, I do not need a million beetles, laying 100 million eggs. 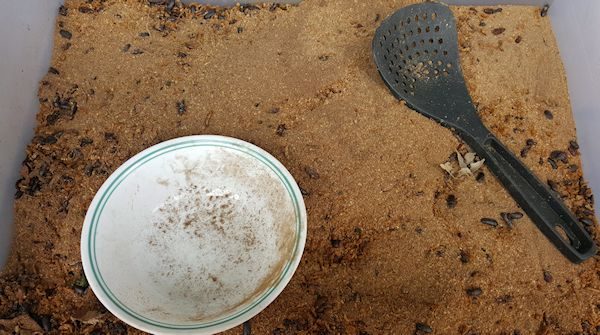 During the winter, I fed them (celery) but I didn’t thin out the beetles. It was cold and I just didn’t do it but I won’t let them go like that again.

The above picture was after I had picked out hundreds of beetles. This container holds 21 cups and it was close to full of beetles and worm “exoskeletons”. 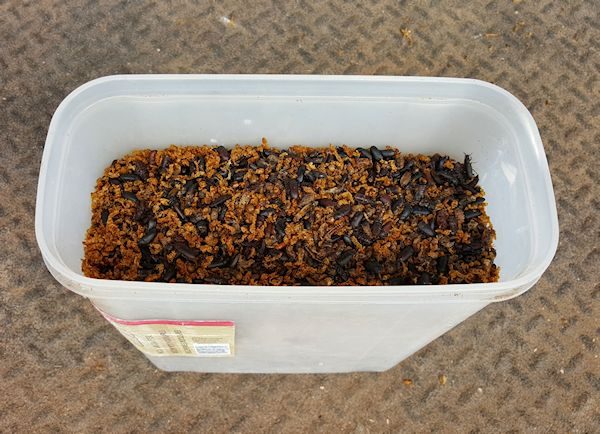 The chickens were quite happy with their treats!  I figured there are enough eggs left in all the worm boxes that I don’t even need any beetles so I pulled out as many as I could get – I think I got all the live ones out and most of the dead ones. 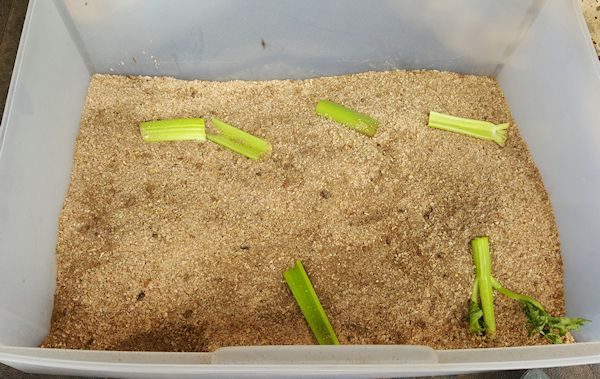 All five beds are as clean as they’re going to get for now. There’s fresh wheat bran and chicken starter for substrate/bedding . . whatever you want to call it. They mostly eat celery, potatoes and apples. I seem to have the best luck with celery. 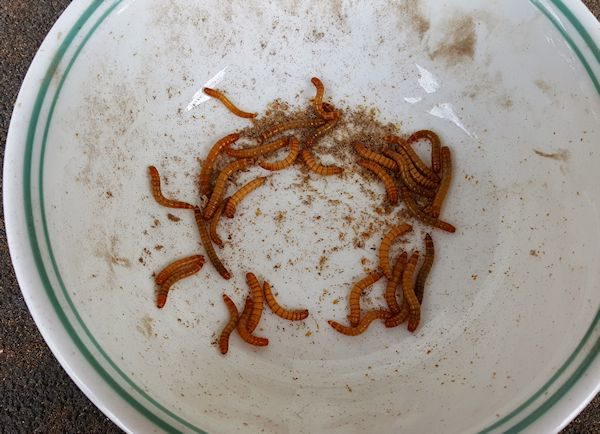 A few of the fat, juicy worms went into a bluebird feeder! I only put out a few at a time because they go in a cup and if it rains, the cup fills up with water and the bluebirds won’t eat the soggy worms.

Feel better knowing all this?