At that point, my mind begins to scramble. I can open a jar of beef tips, cook a quick pot of rice in the pressure cooker. I can scrounge up some leftovers. I can say “would you mind having a sandwich?” Then we end up eating late and it’s bed time!

I don’t like for our dinners to be that way but there are only so many hours in my day and I’d rather be outside than doing anything else this time of year. Soon it will be so hot that I can go out at daylight but will be back in by 10:30 a.m. due to the heat. Then I can go back out after 6 p.m. and that will help with the lunch and dinner situations but for now, neither of us are skipping too many meals.

Yesterday, three different times I was out in the garden and thunder seemed to be getting close enough that I went back inside, though it never rained. I used the inside time to create a nice dinner for a change. 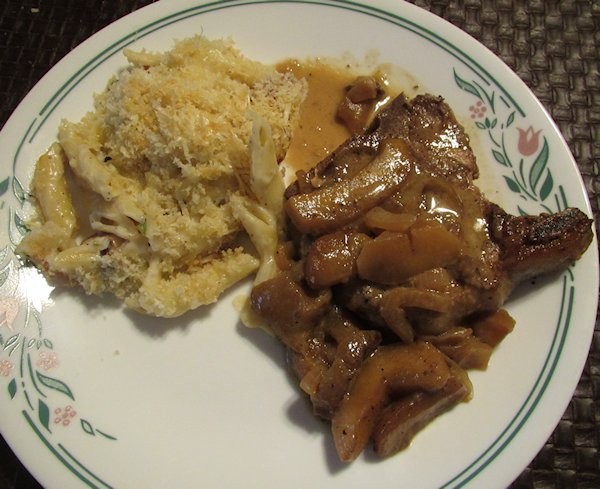 It was basically Pork Chops with Apples and Pancetta, though I used bacon instead of pancetta and since I was using sweet onions, I didn’t add any sugar. I didn’t have apple juice so I just left that off. It was delicious!

The pasta was Giada’s Baked Lemon Ziti, though I didn’t have ziti but had some similar pasta. Again, I used bacon instead of pancetta and halved this recipe and still got enough for the two of us to have for 3 meals.

We also had spinach salad which is probably the end of the spinach. It has all bolted and I’ll probably pull it up this weekend and plant okra in its place.

Both the recipes I used were great and I’ll make them again.