My sweet Chad loves to cook (wonder where he acquired that hobby) and I’ve always envied his ability to open the pantry, not have a clue what he was going to make, pull out a few things and end up with a delicious meal. He went through a stage where he used too much garlic in everything he made. Our house would smell like garlic for days after Chad cooked . . whether he scrambled eggs, fried fish or made some other concoction. We finally convinced him that most folks like about 1/100th of the amount of garlic he likes and then he moved on to curry powder. Vince is not a fan of curry and when our house smelled like curry for days .. that was worse than the garlic. But, overall, Chad is an excellent cook and other than watching what he’s doing and making sure he isn’t serving some roadkill, I love eating at his house.

I always needed a recipe. I could start with a recipe, add or take away ingredients, but I wasn’t much on just pulling things from the pantry and making a decent meal but I’m finding more and more that I do that.

Last night, nothing I thought about fixing sounded good. My old standby is to have Vince grill steaks, I’ll bake potatoes and fix a salad so I got steaks out of the freezer. When he was home at lunch, he said “I’m going to cut the grass this evening” . . which meant he wasn’t going to want to mess with steaks on the grill so I took a couple of chicken breasts out of the freezer and was going to use a jar of sauce over them, and then serve that over leftover rice already cooked and in the fridge. While I was out working in the garden, I kept thinking  . . that doesn’t sound good either. I kept looking at the asparagus and spinach in the garden and decided I would make a quiche. 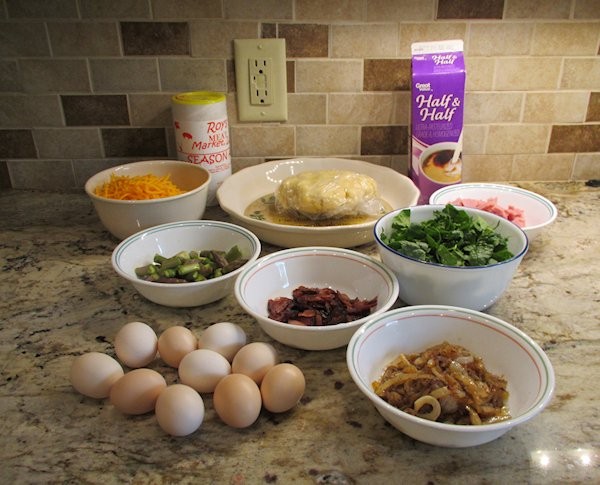 Everything was here that I needed and I didn’t have to find a recipe! Those are bantam eggs so please don’t think I’m using 10 full size eggs! 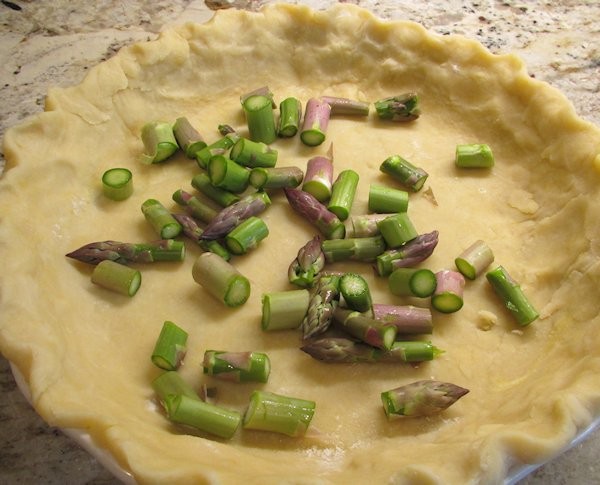 We had asparagus for lunch today so there wasn’t a whole lot left for dinner but it was good!  The whole time I was rolling out that pie crust, I kept thinking (1) I’m so thankful to not have those tile countertops and (2) It won’t be long til I can make a fried pie using my home grown peaches! 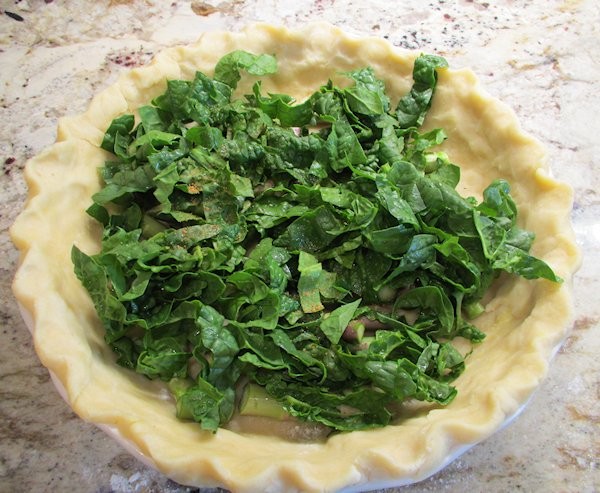 Spinach from the garden, all chopped up! I added a bit of cajun seasoning on top of the spinach. 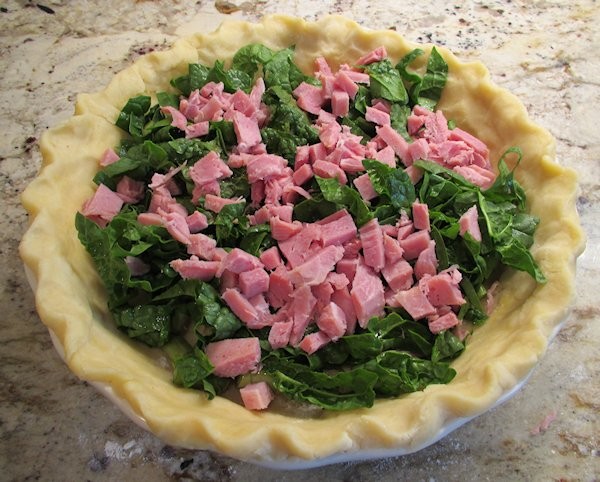 Ham leftover from Wednesday night’s dinner. We’ll be getting creative with that ham . . there’s a lot of that. 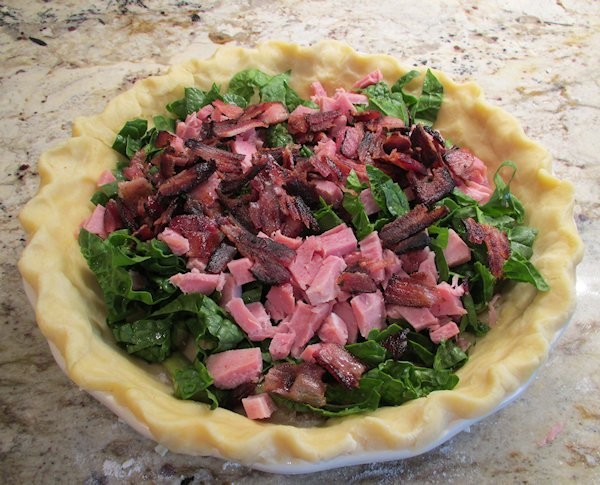 Next, I fried up some of my homemade bacon and crumbled that on top. 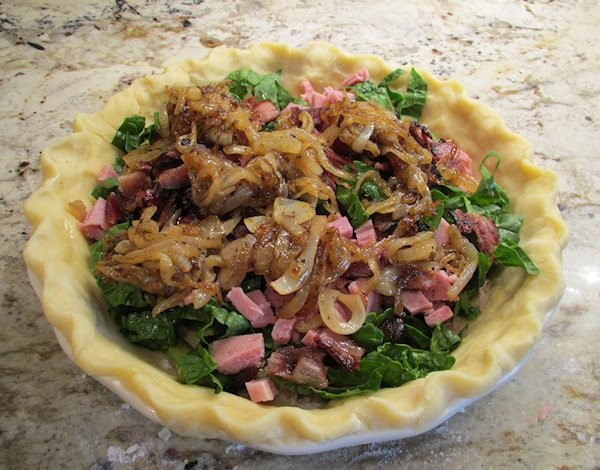 A couple of onions, carmelized, were added next. 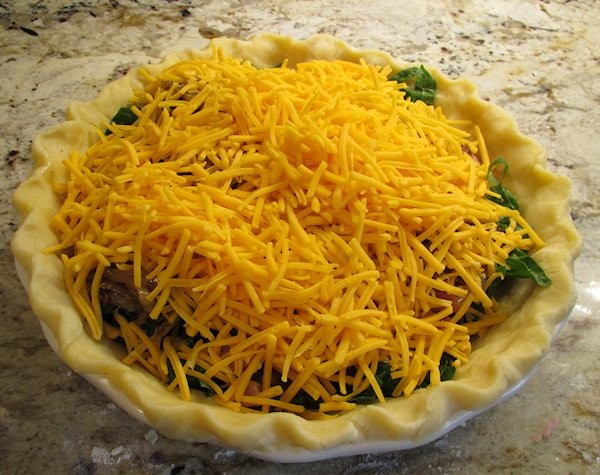 Don’t laugh! I was going to put half cheddar and half Swiss cheese but there was no Swiss in the house and I was too tired to walk over to the shop so I used all cheddar. 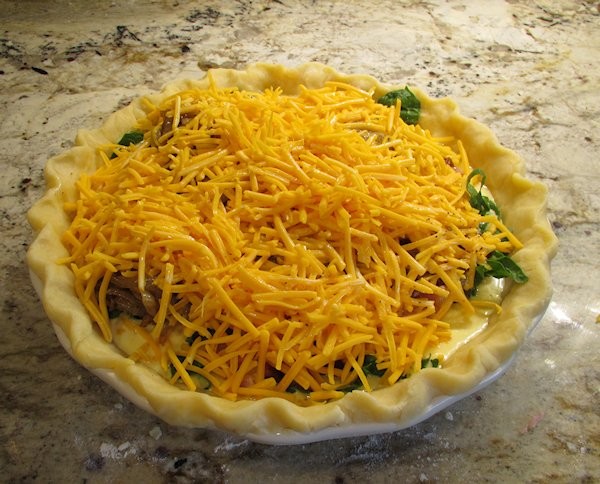 Ready for the Oven

The eggs were whipped up with some Half  & Half and seasoning and poured over everything. Baked and ready to serve! 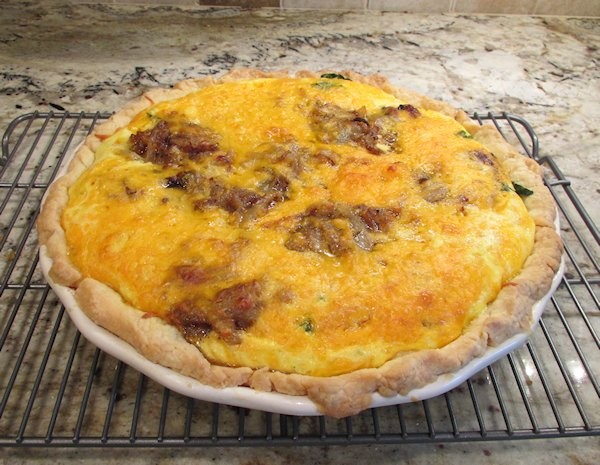 It was delicious and there’s enough for at least two more meals! I’m thinking lunch today and maybe lunch on Sunday. 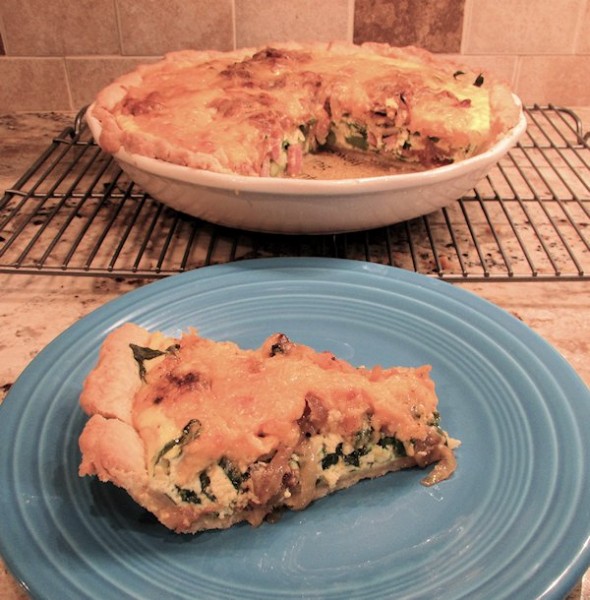 Don’t ask me why the color is off on that picture. I was taking them all about the same time of day, with the same camera, with the same lights on . . go figure. At least it tasted delicious . . even though the photo is a bit washed out.

We had a salad and a slice of cantaloupe and that was our dinner!