Because I’ve done the bacon posts as I’ve done the steps, once I’ve successfully made bacon, I will do one post that covers everything start to finish. That will happen mostly so that I’ll have one place to go when I’m ready to make more (and I won’t have to send Judy 100 emails asking questions!) and also, just in case anyone else wants to make bacon.

The plan was to smoke the bacon on Friday but during the smoking part, I have to be home and I have to be paying attention. We had the solar panel guy out here and I wasn’t sure if he was going to need to turn the power off while he was working (he didn’t), so I waited til he left and then Vince wanted to run to town and then the guy from the meat processor in Santa Anna called and said he had more pork bellies for me so we ran to Santa Anna and by the time we got home and cleaned out room in the freezer for four more pork bellies, it was too late to smoke the bacon.

On Saturday, when I got ready to smoke it, I realized that it needs to be rinsed, wiped dry, and sit in the fridge for 24 hours before it’s smoked so that had to happen before I could stick it in the smoker.

Instructions I’ve read recommend after the bacon is rinsed, I should slice off a piece (or two or three) and fry them to taste the bacon to be sure it isn’t too salty. If it is too salty, soaking for several hours in water should reduce some of the saltiness. 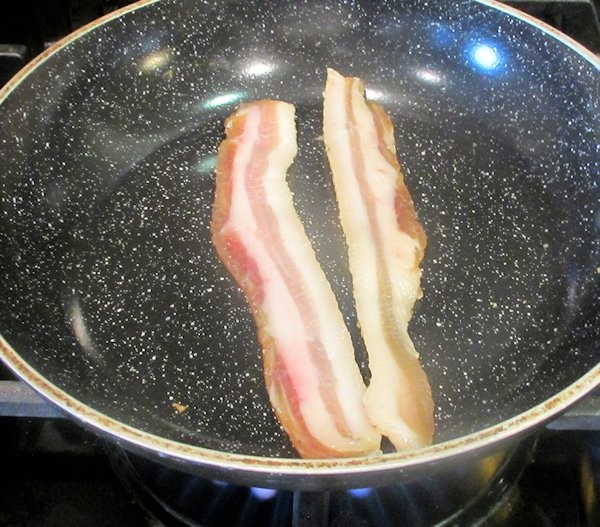 We both approved of our bacon, just as it was! All it needed was that yummy smoky flavor. 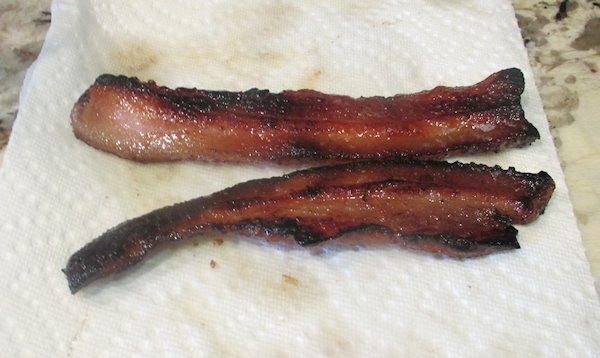 Into the fridge it went for 24 hours before going into the smoker. Isn’t that going to be the most beautiful bacon ever?  🙂 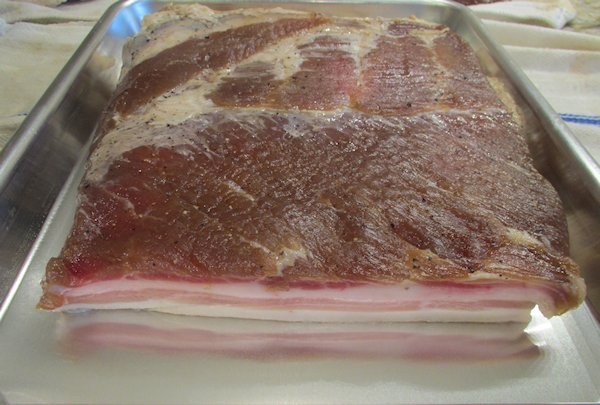 This morning, it is in the smoker! Even though we had bought a smoke tube and some peach wood pellets, since Judy does hers in the Cookshack, we decided to do the same thing. It’s way easier for me to deal with that than with the big grill Vince was planning to use. With the Cookshack, I can do it all myself and not have to bother him with helping. 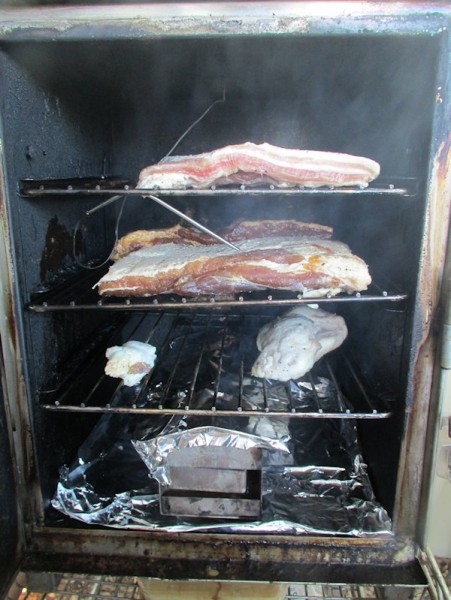 See those nasty two globs of fat on the bottom shelf? The one pork belly I used for this batch of bacon had that on it. None of the others seem to have those big globs. After chopping it off, I was going to throw it out and then decided I would cure it too, and smoke it and I can use it for seasoning beans. Not healthy? My grandparents seasoned everything with pork fat and they lived to be old folks so I figure if they did it, I can do it too.

Also, having it on the bottom shelf, it will render before the bacon does, should it get too hot in there . . which it won’t because I’m going to watch it like a hawk. 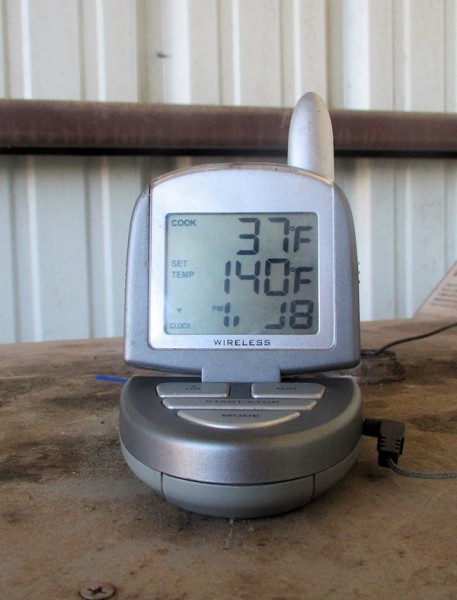 Unfortunately for me, the remote read out does not work inside the house. Metal roofs are great in this part of Texas but not so great for something like this.  With the smoker being under the carport part of the metal shop, it just cannot transmit to inside the house with another metal roof so I’ll be making frequent trips out to check the temp. It will be worth it (what else would I be doing?) to have that yummy bacon!