In theory, we can plant potatoes mid-February but the last two years, I’ve been out in mid-March trying to cover potatoes from a late freeze. Last year, I think we had a freeze in late April or early May and I lost peppers and half the potatoes froze back. I only had enough cover materials for half of the potatoes and all those that didn’t get covered froze back, though they did come back and produce. But, this year, I’m not planting potatoes til March 1 . . maybe.

The problem I run into in this area is that the potatoes stop producing when the soil reaches 80º and that can happen pretty quickly. The best temps for producing potatoes are when the day temps are in the 60 – 65º range and we don’t have a lot of those days. We seem to go from winter to HOT but I’ve managed to have a decent potato crop every year so I’m not complaining.

It’s kinda the same thing with tomatoes. I mostly grow the indeterminate variety of tomatoes and they will produce til the night temps rise above 70º. They can take 45 – 70 days to produce. Once day temps rise above 90º, they say the pollen dries out before pollination is accomplished and the fruit no longer is produced. Even though it seems like we have a long growing season because of our long summers, it isn’t as easy as we sometimes think it should be.

Tomato plants, if kept alive, will begin producing again once the worst of summer passes, and they will produce until frost. I usually keep a couple of plants going, just so we can eat fresh tomatoes, but the most of my tomato production, especially for canning, comes and goes pretty quickly. 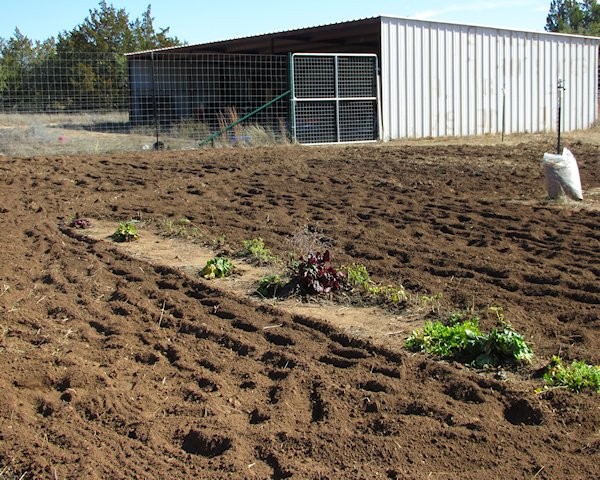 Vince has tilled up the garden and he’ll till it up again before time to plant. He left these few plants that are still producing . .it’s kale, chard and celery . . we give that to the chickens but before the final pass with the tiller, we’ll pull all this out and start from scratch.

I can hardly wait to get started! I love this time of year — the anticipation and a new crop of tomatoes, potatoes, peas, corn, onions, asparagus, strawberries, peppers, eggplants . .  yep, I can hardly wait.