Oh, my . . why did I think things would be different this time? 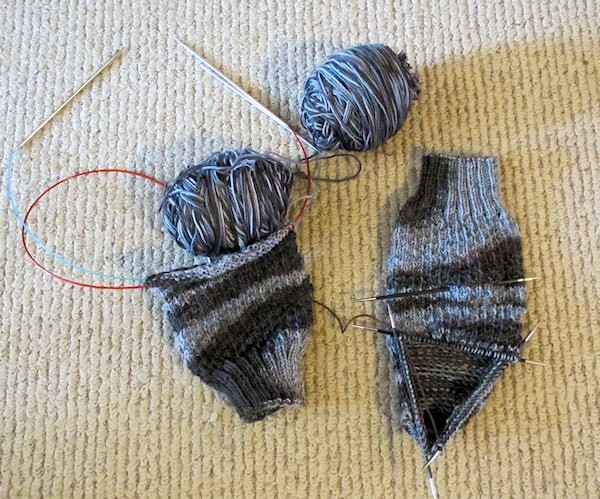 I got as far as the heel and in three rows, I had screwed up twice. It was totally from not paying attention to what I was doing but, on the other hand, with double points, I don’t have to pay attention at all and it’s smooth sailing.

Since I have to blame someone else . . it’s Vince’s fault. I had no idea he was taking off at lunch  yesterday, even though he swears he told me he was doing it (today too!). He was working in the garden and kept coming and getting me to come out and look at this or that. I have a real hard time with interruptions anyway . . I guess that comes from being alone so much, but when I’m trying something new, I should have know to put it down while he was home.

It was frustrating trying to knit the two at once but I know I can do it (I think I know that!) and I think once I get the hang of it, I’ll love the method. Next time I’m going to do a plain Jane pair of socks .. no pattern to follow, and put them aside as soon as Vince walks in the door.

I wish I could get a better picture of the color of this yarn. It’s grayish sky blue and dark grayish brown and it’s so pretty but the pictures just don’t do it justice.