The yarn arrived for Vince’s hats and I got 2 of them made. I’m still plugging along on Blue Sand and Kynance Cove so all I have to report are the 2 skeins used and the 5 skeins added.

Whew . . by the skin of my teeth I’m still in positive numbers. I need to get another sweater finished, don’t I? There’s a bit more yarn coming this week that will be on next week’s report. The sweater knitting bug has bitten Nicole and I ordered her some yarn and as long as it’s not coming to my house and being added to my stash, I’m not counting that. By the way, she just finished her first sweater except for the sleeves. It’s for Addie. 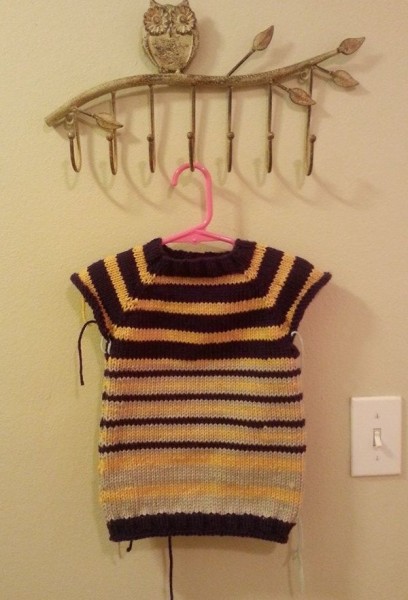 I realized once she started it that I should have had her start with something solid and not something striped but she did a great job. She was going to use just two colors but decided to add a third color so she ended up with enough yarn to make Addie a hat and she did that while waiting for her third color to arrive. Maybe I should count Nicole’s used numbers in my totals.  🙂