Once upon a time, I had a dachshund named Soccer. He was spoiled just like all my critters are but Soccer was very unreliable when it came to his bathroom habits. We could walk around outside for an hour and he would walk in the house and have an “accident”, though it never really seemed like an accident, but more like .. watch me show her who’s the boss.

Speck, also a dachshund, would probably burst before he would go to the bathroom in the house. I can’t even remember the last time Speck had an accident .. probably not since he was a puppy and was being house trained. For a while, when Vince would come home after being gone or several days, Speck would be so happy to see him that he would dribble a little on the floor and he would be so embarrassed, he would run into his crate and try to hide. 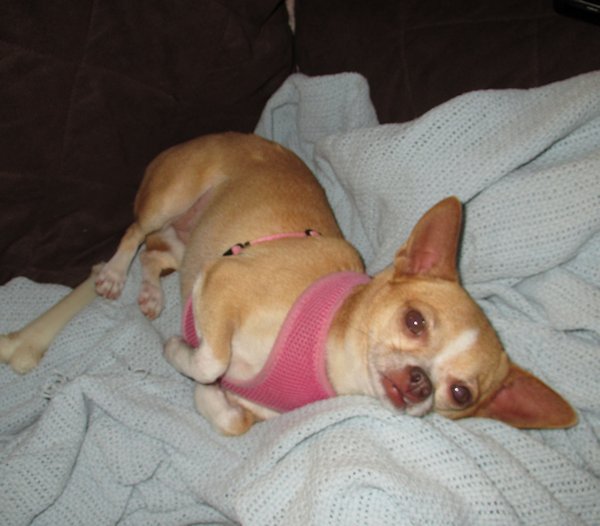 Don’t let that angelic look fool you. She is the most conniving little critter ever! So far, she’s had two accidents in the house and I’m not seeing any reason for that to have happened. A couple of weeks ago, we were gone for about 6 hours and I was afraid to see what I would find in the house but she hadn’t done anything! It’s purely a matter of convenience with her. If it’s raining or she’s not feeling like going outside, she’ll just go find a quiet spot and take care of business. Thank goodness we don’t have carpet or she might be finding herself a new home.

Every time she gives me any indication she needs to go, I take her outside. This morning, between daylight and about 10:30, I went outside with her four times . . we walked probably 20 minutes each time and she never did anything. Vince came home and he walked with her probably half an hour . . nothing! Before he left to go back to work, he went out with her again . . nothing!

I was so tempted to take the leash off and send her outside and I think that’s what she really wanted. It was a warm, sunny day and apparently she figured out that if she couldn’t run loose outside, the next best thing was being out on a leash, dragging one of us around.

During the afternoon, I took her out maybe four more times.  Nothing! When Vince got home, he took her out and told me “we’re not coming back til she does something!” I figured that meant I didn’t need to fix dinner because Vince wouldn’t be back inside yet but after about 45 minutes, he came in and announced that Rita had finally done her business.

Finally, we could relax stop watching her!