I’ve pretty much always been a fan of The Pioneer Woman and for a while, I made so many of her recipes that Vince quit asking “Where did you get this recipe?” and would say “Been on PW’s site again?” For some reason, Vince has never been a PW fan and I don’t know why. He definitely loves eating good food and he always liked the things I fixed using her recipes.

What’s your favorite Pioneer Woman recipe? You know I’m going to try it!  🙂

We no longer have satellite/cable but we watch shows through Netflix, Amazon, and I have no idea what else. I don’t have a clue how Vince finds all the shows he finds but there’s never a shortage of shows to watch on TV, even without satellite. A couple of weeks ago Vince said “Oh, here’s something YOU will like!” and he had found Pioneer Woman’s cooking show available. Now, every night, that’s one of the first shows he watches. 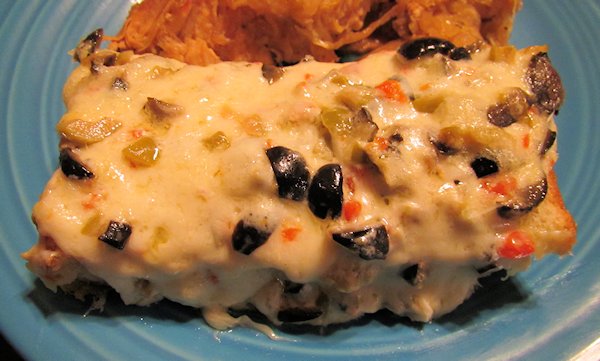 A couple of weeks ago, we watched the episode where she made Olive Bread and ever since seeing it, he had been after me to make it. Over the weekend, I made it and let me tell you . . if you like olives, and if you don’t care so much every now and then about fat content, you must try this recipe! It is so good! I took half (one long side) of the French bread and baked it. The other side, with the yummy cheesy olive spread, went into the freezer as PW suggested on her website, I froze it and can’t wait to have it with leftover turkey! This bread was so good!  I left out the green onions because they were in the fridge in the shop and it was raining and I didn’t want to walk over and get them and it was still delicious. I’m thinking if I threw a few pepperoni slices on it, this would be better than any pizza we can buy locally and a whole lot easier than making homemade pizza. Who cares that there’s no tomato sauce!

This past weekend, we watched the episode where she made Tres Leches Cake. Vince said “Have you ever made that?” Yep, not her recipe but I have made it. And, he’s eaten it! It was always one of Chad’s favorite cakes. Her recipe sounds great to me because of the way she whips the egg whites and then adds them to the cake batter. That method makes such a difference with my waffles and pancakes.

Yesterday when Vince got home from work, I had a friend over visiting and Vince, with his infinite manners, sat down and the first thing he said is “Are we going to Walmart tonight?” My friend said “I guess I’ll be going now!” and I was saying “I don’t think we need anything from Walmart” but Vince said “I’ll go take care of the chickens and then we can go!” Goodbye . . friend . . glad you were able to visit TIL VINCE GOT HOME!  🙂

We got to WM and he said “Did you need anything?” Nope . . not a thing! What about you? Do you need something? Nope, he didn’t really need anything either. So, the night before Thanksgiving Eve, with everyone from this county and most of the surrounding counties shopping in Walmart because I think our WM is the closest one for about 2 hours from here, it was impossible to even walk, and with almost all the checkout lanes open, we still had to wait in a long line (even the self check and express lanes had long lines!) . . we were wandering the aisles at  Walmart. Finally . . he got to the real reason we were there. “Do you need anything to make that Tres Leches cake?” Nope, I have everything I need at home to make it. Hmmm  . . tell me again why we’re at Walmart!

Then he decided we should get more Dr. Pepper since yesterday was the last day they were on sale. How’s that for justifying why we should be out at Walmart two days before Thanksgiving? Dr. Pepper . . how could I say no to that?  🙂

I guess today I will be making a Tres Leches cake!