I saw a recipe recently that the writer calls “All Purpose Healing Salve“.

It seems that every year. . yes, it’s probably an aging issue but I’m not quite ready to admit that, I end up with more skin issues. It’s gross I know but my feet have been an issue for a while. They crack to the point of bleeding and about 99.9% of that problem could be cured if I would wear shoes and socks and flip flops all summer and half the winter. Just last night we were out, the temps were in the 20’s and Vince looked down and said “Tell me you don’t have flip flops on your feet!” Yep, flip flops . . my shoes of choice!

My hands are in water so much and between dealing with chickens and dirt in the garden, I wash my hands dozens of times per day. I keep lotion and creams everywhere – in the car, by my chair, on my side of the bed . . at any given time there are probably 10 or more bottles of lotions or creams. 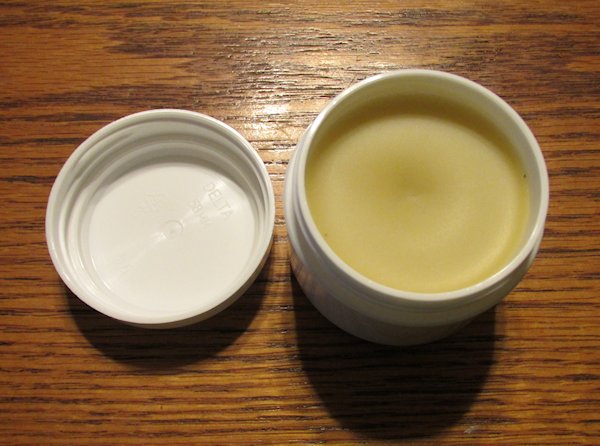 When I saw Paleo Mom’s Healing Salve recipe, I thought . . it’s worth a try and I had everything except the calendula petals. I even had these handy dandy little containers. I suppose I had some project in mind because I had beeswax, jojoba oil, sweet almond oil and several essential oils still in a box from Amazon.

Several years ago, I made hand cream and gave to all my friends. This year, I think I’m going to make Paleo Mom’s Healing Salve. I’m not going to go so far as to say it has healing properties but I will say that I used it on my hands off and on yesterday, and last night at bed time and they look much better today. Two cuticles that were completely cracked and bleeding seem much better today.

Tea Tree Oil (melaleuca) has a reputation for being quite a little workhorse. Of course, the companies that sell essential oils are quick to point out its value but I found this info on the American Cancer Society’s page interesting.

If you’re interested in trying Paleo Mom’s concoction, and don’t happen to have all the ingredients sitting around your house, here are the ones I used (since the invoice was still in the box!) (All are Amazon affiliate links.)

First, if you’ve never used coconut oil, you might want to get a larger container and try cooking with it. We began using it because it has a longer shelf life than many of the other oils we use for cooking but coconut oil is good for so many things. The link below is for a smaller container of coconut oil but if you use a lot of it, buying the larger container is more cost effective.

Coconut Oil
Plastic Jars with Dome Lids (2 oz.) (With one batch of the recipe, as written, I filled 4 of these 2 oz. containers.)
Beeswax
Tea Tree Oil
Lavender Oil
Calendula Petals

The oil is a bit greasy but it does seem to “soak in” fairly quickly. When using it on my feet, I do wear socks after applying the salve.

Now I’m off to try to figure out what I had originally intended to do with the oils, containers, shea butter and jojoba oil I purchased!