He was just a little guy when he stuck he head through the wires on the dishwasher tray and then turned his head and got stuck. Always being the wimp, he was squealing and flipping around . . it was about like trying to catch a greased pig. Vince had to come help me get him loose so that’s how he got his nickname.

I think Rita’s nickname can be “The Anti-Dishwasher Dog”.

She makes her little nest on the sofa each night. 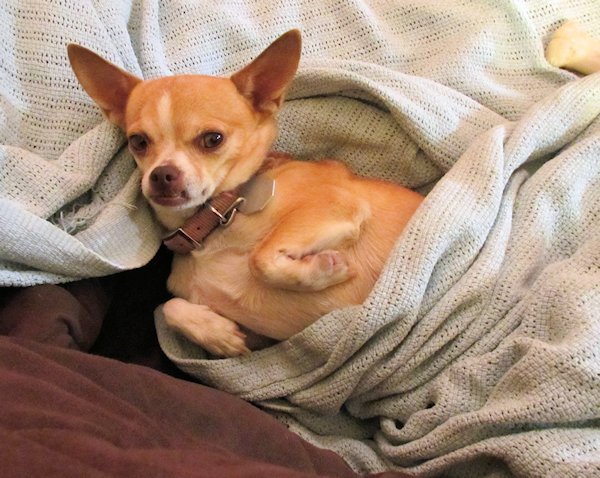 A couple of nights ago, she woke up barking and she was obviously startled or scared. I got her all tucked back in on the sofa, convinced her she was safe and I went back to bed. About 10 minutes later, the same thing happened. I doubted she heard a burglar but thought maybe she knew some kind of critter was outside.

Last night . . same thing. She was barking and making lots of noise right before 1 a.m. That’s when I realized . . I set the dishwasher to come on 3 hours after we go to bed and the dishwasher noise was scaring her. It’s so quiet . . I didn’t even notice it the first night but last night, I could hear it. I took Rita into the kitchen and she was afraid of the dishwasher.

Isn’t it funny the sounds that some dogs notice? When we first got Speck, his crate was in the laundry room right next to the kitchen. He slept in his crate and I guess he just got used to the dishwasher but maybe Rita has never heard before coming here. My guess is that up until now, she’s been outside when it was running or we had enough other noise in the house that she didn’t notice it.

I guess we won’t be setting it to come on during the night any more . . not if we want to sleep through the night.