They may never be friends but Speck is no longer wearing a muzzle and unless something out of the ordinary happens, there is no growling, biting or attacking. Monday night, we had Rita in the house and we had the muzzle on Speck. Things weren’t terrible. Tuesday night, Speck barked the entire night.  Wednesday I said to myself . . they have to work it out. I can’t take it any longer so while Vince was at work, I let Rita in and I stood back and watched. She ran up to Speck to sniff and Speck walked away like he was halfway afraid of her. After that, they’ve pretty much ignored each other. At night, Speck sits in the chair with me and I’ve been careful not to let Rita jump up in the chair with us. That would probably cause problems.

Rita has been sleeping in a crate in the sewing room but since it gets dusk about 7:30, we were putting her in then and it isn’t daylight til after 7:30 in the morning so she was staying in there an awful long time. We decided to bring a smaller crate into the house and let her sleep in there. That way, we let her out about 9:30 p.m. when Speck goes out for the last time, and we take her out again in the morning about 5:30 when we get up. She whined a bit in the crate and a couple of times, each of us got up to mist her with the spray bottle and say “NO!” for whining and barking.

Friday night (last night), we decided to let her sleep on the sofa. We have a slip cover and an old blanket over that. She was happy and quiet on there. 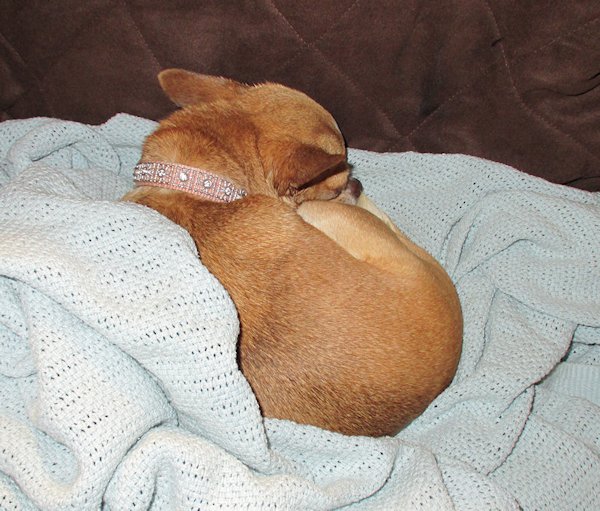 Speck curled up on his pillow by my chair, which is where he sleeps, and all was well. 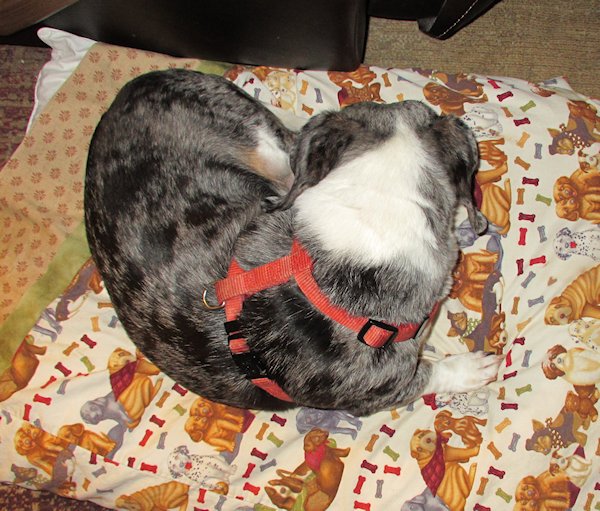 Speck on his Pillow

Rita spends her days outside as long as we’re home. If we’re gone for longer than an hour or so, Speck goes into his crate, whic is what always happens, and we put Rita behind the gate in the kitchen.

We may have worked this all out with no bloodshed and minimal extra gray hairs for mom!