Getting double  yolk eggs just makes my morning! One of the bantam eggs this year even had a double yolk. For this morning’s breakfast, I cracked three eggs in a bowl and got four yolks! 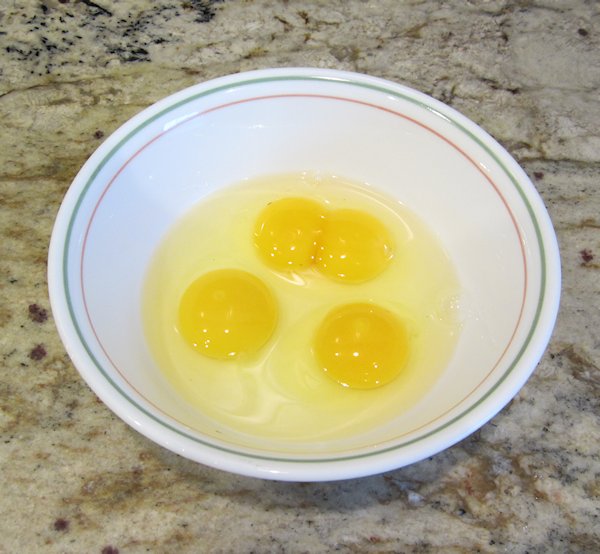 We’ve always found that when hens first begin laying are when we’ll get a few double yolk eggs but once their systems figure it all out, the double yolks stop. I’m guessing this double yolker came from an Iowa Blue since they’re just starting to lay. I can sometimes guess which eggs will be double yolkers because they’re longer, but not necessarily a whole lot bigger, than regular eggs.

Did you know . . hens have an ovary and in that ovary are follicles and each follicle should produce one egg yolk. When a chicken is mature enough to begin laying, and that time period varies with each breed of chicken, some begin as soon as 14 weeks and we’ve had some that were 6 months/24 weeks before they began laying, they will drop a follicle/yolk and it travels through the oviduct. As the yolk passes through the oviduct, which can be considered a little assembly line, the white (albumen) is formed around the yolk, then the membranes, then the outer shell, then the egg is laid.

It takes 24 – 26 hours from start to finish and that is why hens lay no more than 1 egg per day. The amount of daylight hours can affect egg production. Chickens need daylight for the show to continue!  Some folks will put lights in the coop to simulate daylight and that helps but our feeling has been that Mother Nature knows what she’s doing so if our hens need a break during the winter, that’s fine. Last year, we were dependent on 2 old Dominique hens, who each lay one egg every other day during the summer, and 2 older red hens that had survived the dog massacre but were injured. The Dominique hens almost quit laying completely last winter and the 2 injured red hens, between them laid about 2 eggs per week. It was terrible . . I was having to buy eggs at the grocery store! I don’t think we’ll have that problem this year. The new red hens will lay all winter so even if everyone else stops laying completely, I’ll have 5 or 6 dozen eggs per week, which is enough for us and our friends to share.

The Chicken Chick has an excellent post on how eggs are made if you want to know more about how they get here.