Vince is such a tender hearted guy sometimes .. other times . . not so much, but we have this one rooster. His name is Jasper. He’s a bit high strung and he’s huge. 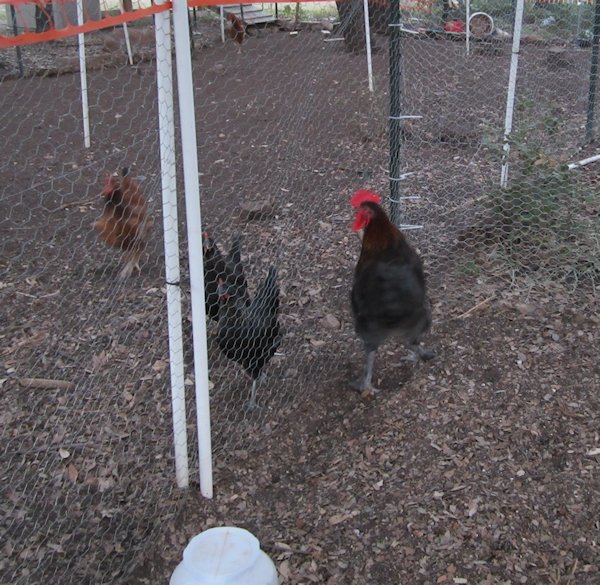 He’s one of the marans but he’s about 2-1/2 times bigger than the hens and quite a bit bigger than the other roosters. We have too many roosters in there and Jasper isn’t mean (he isn’t nice either), but he’s just so darned big. We put an ad in the local ads trying to find a home for two extra roosters and one did go to a new home, where I hear he’s quite happy but no one seems to want Jasper. It isn’t easy to get rid of an extra rooster!

So, Jasper is in a coop all by himself. He’s right next to the red chicken/Iowa Blue pen and there’s an Iowa Blue hen that stays right over by the fence with him. She isn’t close enough for Jasper to get what he *really* wants . . if you get my drift . . but she is pretty devoted to him. 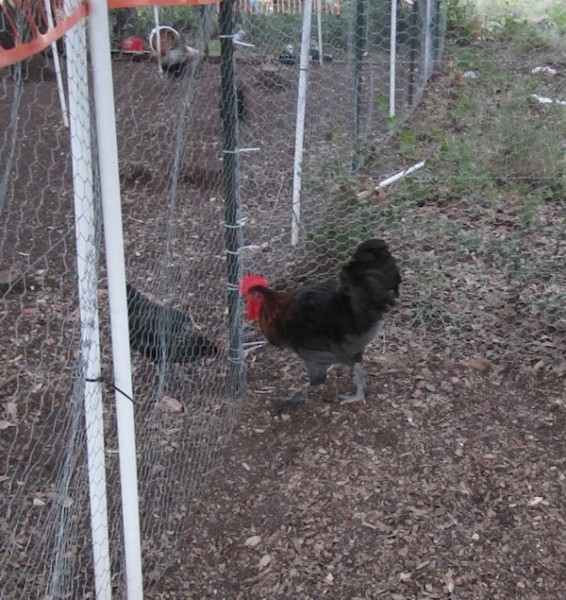 Vince has been letting the chickens out for the past couple of weeks and he lets them out just before daylight so he can get to work. I wait til full daylight because there are enough critters out there . . I want to see what’s about to get me. This morning, Jasper was not happy with the timeliness of his coop being opened up. He was banging on the walls . . you would have thought there was a stampeding buffalo in that coop. It kinda reminded me of when Chad was about 13 and if something wasn’t going his way, he knew better than to be mouthy about it but he would make enough noise – closing doors a bit too hard, “accidentally” dropping a book on the wood or tile floor,  etc.  It’s been almost 14 years since Chad was 13. WOW . . how time flies. See . . one ornery rooster has me fighting back tears at daylight . . missing Chad and realizing how quickly time passes.

Anyway . . I think we need Jasper dumplings this weekend but somehow, I’m guessing he will be around for a long time, stomping his little rooster feet to express his displeasure with my actions in the morning.