Poor Vince . . he’s trying. It’s kind of overwhelming for him because he has to take care of all the chickens, water the few remaining things in the garden (okra, sweet potatoes, cucumbers, artichokes and a few herbs), take care of Boots’ needs, take care of Speck’s needs, take the garbage out and . . put food on the table!

We do have plenty of food but yesterday and so far today, I haven’t even felt like opening a jar and turning on the oven . . pathetic on my part, right? At this point, I stay awake for 20 minutes, sleep for 3 hours . . but that’s exactly what happened last month when I had this done so I’m hoping by Friday I’ll be able to stay awake at least long enough to finish one row of knitting. Who has time to sleep 20 hours a day? I know . . don’t tell me . . my body is telling me it needs the sleep and I’m not very good at staying awake when my body says sleep. Plus, I don’t sleep on the sofa or in the chair . . I curl up in the bed with my favorite pillow and quilts and I’m out for the count.

Last night, after Vince’s attempt to feed me Ramen Noodles, which wasn’t met with much appreciation and enthusiasm on my part . . he brought home a pizza for lunch. I guess I was so excited to eat that even after grabbing the camera, I forgot to take a picture. Or . . maybe subconsciously I couldn’t bring myself to photograph takeout pizza. But, I was hungry and I was awake and I wanted food quickly and it wasn’t terrible. The best part . . he bought two and he loves leftover pizza so I know what we’re having for lunch tomorrow.

If you don’t count Ramen Noodles for dinner, Vince knows how to please his woman! 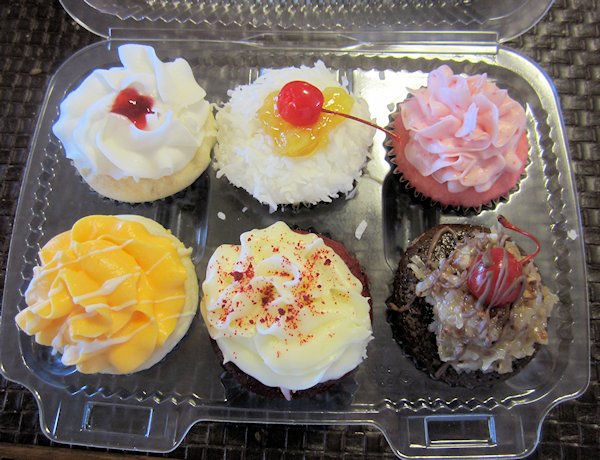 There’s a little bakery in town and I love their cupcakes. LOVE them!  They’re packy (not fluffy like cake mix), sweet and they have the best flavors. Thank goodness, I don’t pass by there very often . . because you know I don’t leave the house very often but I do try to avoid going in the area of Flour Power. If I get by there once a month, that’s about as indulgent as I will allow.

One day Vince, who isn’t a big fan of sugar and good icing, so he isn’t nearly as impressed with them as I am, said “How much are these?” Ugh . . do I say “I can’t remember” or do I tell the truth? I took the high road and said “I’m not sure sure!” He knows me too well and he said “I’d hope they’re less than $1 each!” Wrong! I told him they were $1.99 each and now, in addition to sneaking yarn into the house, I’m having to sneak cupcakes into the house!

Vince was trying to be especially nice . . maybe making up for the Ramen Noodles last night, or hoping if he pumped enough sugar into me, he might get a home cooked meal for dinner tonight . . but he brought home the cupcakes at lunch. Two for him (the chocolate – Red Velvet and German Chocolate) and four for me (Raspberry, Pineapple, Strawberry and Orange). I like his version of half . . 4 for me and 2 for him!

After lunch he said “Something is wrong with this picture! I got two large pizzas for the same price as six cupcakes!”  Quality, not quantity, my dear!