The story begins with this:  My tomatoes are out of control. Where are the grasshoppers when I need them most? Why aren’t the deer jumping the fence to get into the garden?

Normally when I can tomatoes, I raw pack them whole or cut just enough to fit into the jars. There’s a lot of liquid that cooks out of them but it’s flavorful and I love adding it all to soups and stews. Since I was on slow speed for a few weeks, the tomatoes had been piling up. I had three five gallon buckets of tomatoes that HAD to be canned yesterday. I had put it off as long as I could. I made the mistake of going into the garden and noticing that the vines were covered and had to be picked. Lucky for me, one corner was too muddy from my watering so I didn’t even look at those but I picked a fourth five gallon bucket full of tomatoes. I can’t even carry them in when they’re that heavy so I had to wait for Vince to bring them inside. Most of yesterday was spent putting up tomatoes. Knowing that putting them up whole and raw would probably fill every empty jar in the house, I decided to stew them down with peppers and onions (since I have those coming out my ears too).

The ones that were the prettiest for slicing, I shared with friends, as well as about a gallon of Porter tomatoes. These are one of my favorite tomatoes for growing and eating and juicing but they’re a bit small for peeling and canning so I try to eat and share most of those.

I filled my two big stock pots with tomatoes and stewed them down and end up with 14 quarts of stewed tomatoes yesterday morning and finished another 14 quarts last night.  I was so tired the last batch of 7 quarts stayed in the canner overnight . . couldn’t even wait for it to cool down before I had to go to bed.

Last night I told Vince . . I’m happy with my tomato crop and if we don’t get any more, I’m good!

This afternoon he had been out cutting the grass around the garden and he called me outside. On my way out the door, I had to laugh. 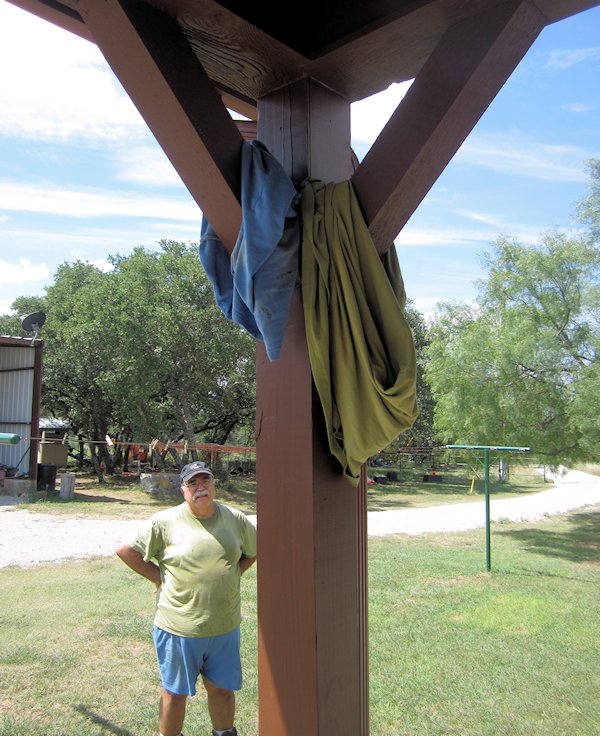 In the evenings, he’s often so dirty and stinky that he strips down at the back door and leaves his clothes hanging on the post so that when I’m ready to wash them, I’ll just get them from there and not stink up the laundry room.  Look at that . . same exact clothes he was wearing  yesterday — green shirt and blue shorts! He’s so funny! 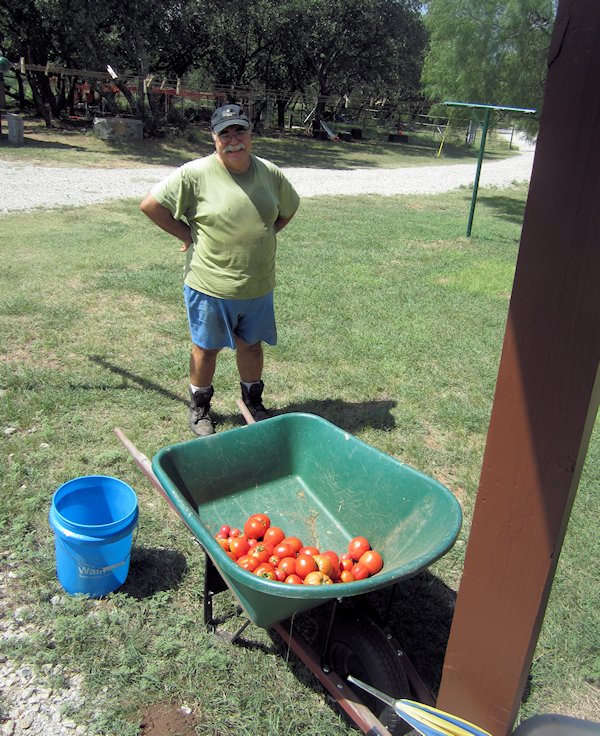 He was so proud of himself . . he had picked the tomatoes! Ugh . . not more tomatoes. I told him . . let’s put them in that bucket and go leave them on the neighbor’s porch and then we’ll run! 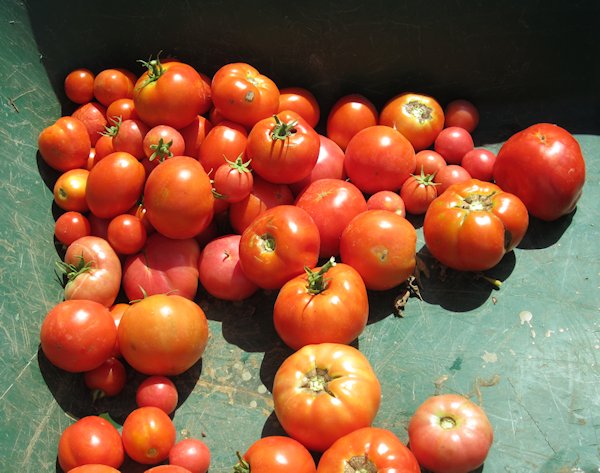 They’re some pretty ones but really . . I’ve about had all the tomatoes I want to deal with for a while.  One thing for certain: Other than eating a few of these, I’m not touching them til Monday, and then there will be enough to pick to make a whole canner load again (14 quarts). Will someone remind me to plant less than 10 tomato plants next year?