In some fashion or another, I’ve had a design wall for the past 15 or 20 years. Sometimes it’s been as simple as a flannel backed tablecloth tacked up to a wall. One of the problems that I’ve had in the past is that I always knew we would be moving and my sewing room was either a spare bedroom or a basement family room and I didn’t want to do any more damage to the walls than was absolutely necessary. In Missouri, the design wall was simply extra thick batting attached to the drywall with tiny push pins and then a layer of flannel was pinned over that. It worked fine. There wasn’t a cat living in the sewing room.

When we moved here, halfway committed to staying here til “the end”, and finished the sewing room, I knew I could do anything in there I wanted to . . within reason . . and no one cared and I didn’t have to worry about a relocation company getting picky about the condition of the walls when I left. 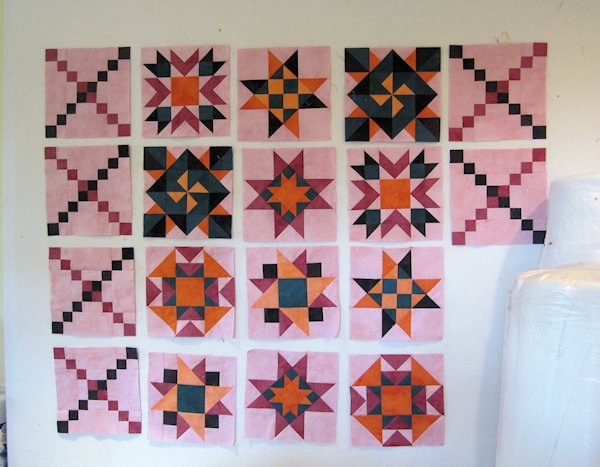 Tell it to the Stars

The first design wall I put up in there is simply two sheets of the pink foam insulation board from Home Depot. Again, I pinned the batting to it and covered it with flannel, tucking all the edges behind it and pinning  the flannel to the back of the insulation board. This just stands up against the wall and if you notice, you can see that the bottom sticks out a bit, which means Boots gets back there and does who knows what because every now and then I find the whole design wall has toppled forward, blocks have fallen off and Boots has had a grand time in there.

For a second design wall in the sewing room, I had done what I did in MO . . pinned the batting and flannel to the wall. This was before Boots. As soon as he arrived and learned to climb drywall, he tore down the design wall . . completely ripped it off the wall, pins ripping through drywall . . he left a mess.

Boots has calmed down and I really need a second design wall so last week Vince went over to the sewing room, listened to my plans and deemed them at least possible. Not all of my grand ideas work out so great in real life. 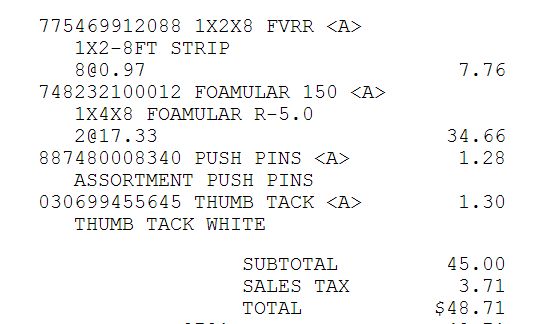 We ended up buying 5 extra of the furring strips because they’re for another project so the cost for the design wall was actually about $40, including the tacks and the push pins (though I didn’t end up using the push pins).

When planning a design wall, consider the following:

Here’s how we did it.

First, because I had lots of electric outlets put in when we finished the sewing room, I didn’t want to block any of those and I didn’t want my blocks too close to the floor anyway because of Boots and since I don’t often put blocks any higher than I can reach, we decided to make the wall 72″ high. That allowed us to come down from the ceiling a few inches and the bottom of the design wall is a few inches above the electrical outlets. That means we cut 24″ off the bottom of both foam boards.

As far as width, I didn’t want to be right up in the corner behind the book case (where I have those 5 gallon buckets in the picture), and I especially didn’t want to move all that for Vince to install the design wall, so we came out from that corner a few inches. Boots sits in the deep windowsill and I wanted the edge of the design wall to be just out of his reach so we came up with 72″ wide, so we cut 24″ off the sides of one foam board.  That left us with one piece of foam board that was the full 4′ x 72″ and the other that was 24″ x 72″.

Vince cut the furring strips to be 69″ long, leaving 1-1/2″ on each end so I could tuck the batting and flannel behind the foam board. (The furring strips cause the board to be 1″ from the wall.)

He used his level and drill and his electric screwdriver.  Four screws were placed along the length of each strip, securing them into a stud. 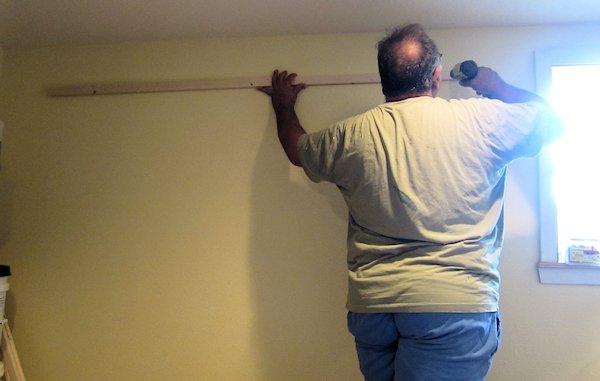 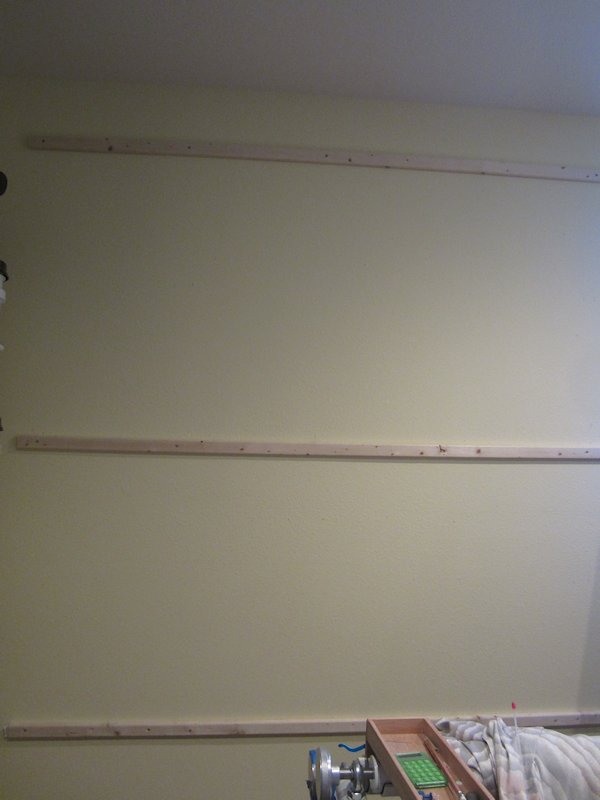 The foam board panels were screwed into the furring strips, using a fender washer to keep from shattering the foam board. 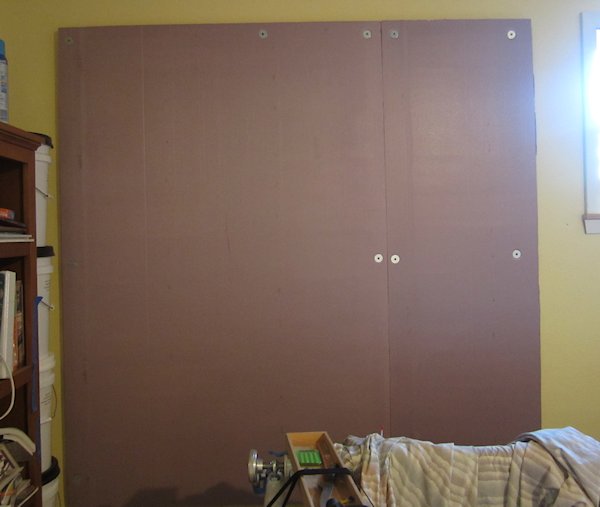 Next, a layer of batting was pinned onto the foam board, leaving a couple of inches extending for tucking behind the boards. It was a package of cheap, fairly thin batting I had bought for some project . . no telling what . . but it worked fine for this. 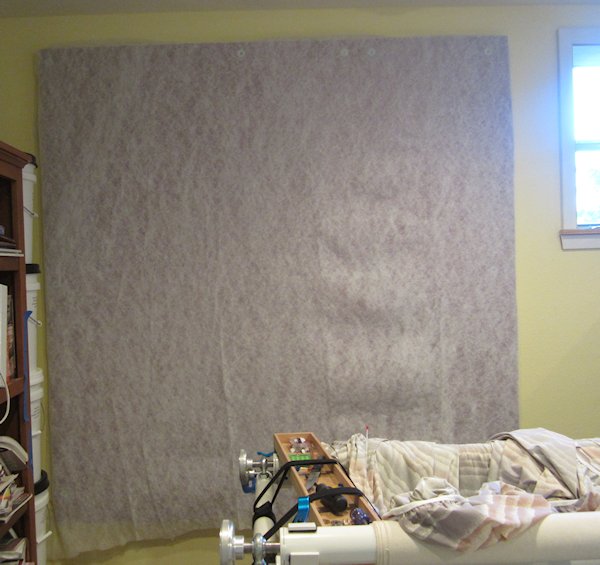 Finally, the flannel was added to the top layer. Because I only had 45″ wide flannel, there’s an overlap. I used white thumb tacks to secure the bottom layer where it’s underneath the top layer. 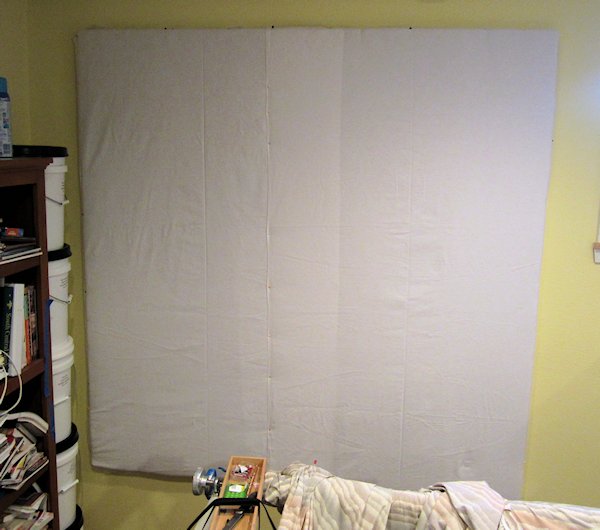 The push pins weren’t long enough to secure the flannel and the batting into the foam board. They wanted to pull loose so I used the longer flower head pins that I use with the longarm. Even regular sewing pins would be long enough and would work.

This morning, I could hardly wait to peek into the sewing room and see if Boots had done any damage and it looks like he did not. Yay! 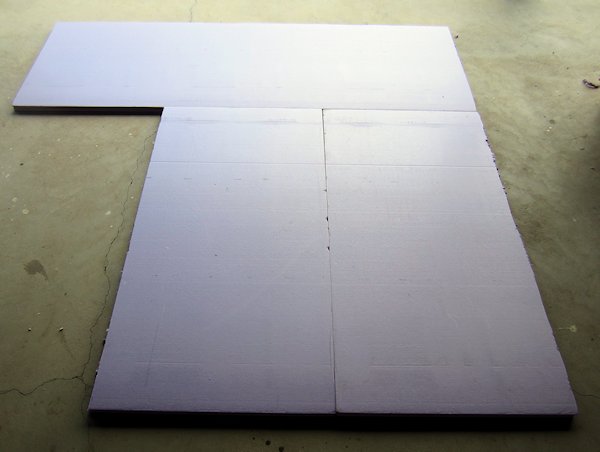 I haven’t mentioned it to Vince yet but from the leftover pieces of foam board, we can make another design wall . . about 48″ square! A quilter can never have too many design walls, right?