As previously reported, the youngest group of chickens was moved on Monday evening. I could hardly wait to get outside yesterday morning and let them out. They have such a zest for life at this age. I start my morning off every day watching those little chicks come flying out of their coop, ready to tackle the world . . their little world as they know it. Not a morning goes by that I don’t think . . that’s how I want to live my life . . hop out of bed each morning, ready to tackle my little world with enthusiasm and boundless energy. Of course, I had to make an exception this morning because the bounding was more like easing out of bed to see if anything was hurting but I’m happy to report . . I feel great! I’m still going to sit in my chair and knit all day and remind Vince that I’m recuperating and can’t do anything except sit in my chair and knit!

So . . I got up yesterday morning to let the chickens out. The neighbor recently killed a rattlesnake so I’m being real careful outside . . almost careful enough to not wear flip flops. The darned bunnies scare me every morning. 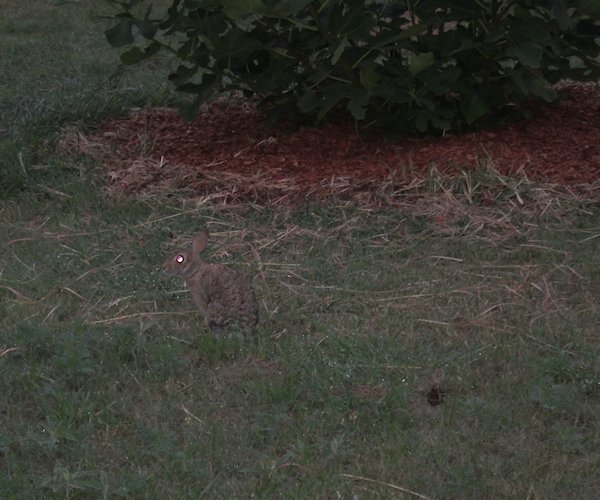 It’s sometimes hard to see them when it isn’t good daylight yet. Just last week, the weeds were really tall under that fig tree in the background. I was watching where my toes were so they didn’t get snakebit and what do you think came hopping from under the fig tree? Hopping gave it away, huh? Yep, a rabbit and he was so close, he brushed up against my leg. It was another one of those days when I was glad there were no close neighbors because I might have said a bad word!

So . . back to the chickens. I’ll get there eventually.

I let the chickens on the east side of the coup out first and then let the new ones out on the west side. 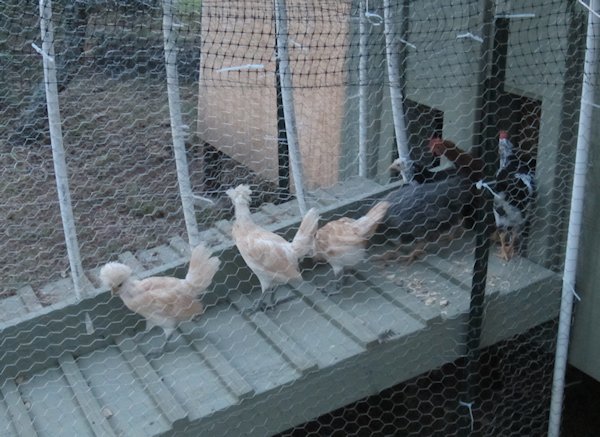 The chickens on the east side were already out by the time I walked around to the coop and the new little chicks cautiously began walking down the plank. 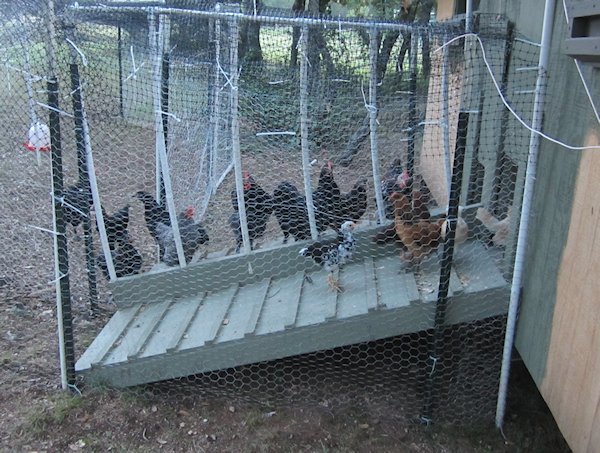 The chicks from the east side came running back to meet their new neighbors! I stood there as long as I could but figured being late for my appointment at the hospital would not be a good idea so I had to give up and go in and get dressed before they ever came all the way out.

I never made it back to that coop yesterday but Vince said they did come out and they seemed to be enjoying their new larger space. This morning he let them out for me so I didn’t have to go out there and deal with the rattlesnakes and bunnies . . he’s a good husband!