Our icemaker issues have been resolved, though temporarily I’m sure. In the blink of an eye, almost, I went from wanting to turn the fridge into a worm bed, into saying “I love this fridge”.  That’s how I am! 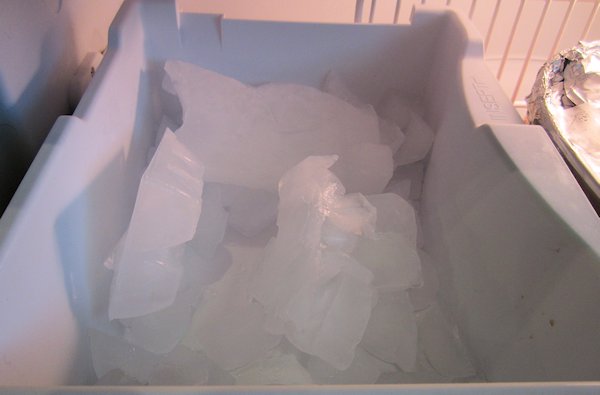 This is what our icemaker was producing. Huge chunks of ice. I told Vince we were going to give up glasses and start drinking out of a 5 gallon bucket because that’s the only thing big enough for these big hunks of ice.

Apparently the ice wasn’t dumping correctly so when it thought it had dumped, the tray filled up with the pre-determined amount of water and the ice that was left in the tray got frozen to the rest of the ice and the water that had no place to go poured over into the ice already in the ice bucket so even if I used ice trays and dumped them into the ice bucket, they because a solid sheet of ice once the ice maker refilled itself.

Do you know that on some models, this one of course . . you cannot remove the ice maker because something about the electronics . . it will mess up the whole fridge. There’s so much we don’t know!

We finally just gave up on the ice maker, and turned it off. That didn’t cause a problem and it stopped the water from dumping. I was able to use ice trays in the shop fridge, bring them over, dump them in the house freezer, fill them up in the kitchen, take them over to the shop and hope by the time I got there, I hadn’t spilled all the water.

When the repairman was here last week, he told Vince . . It’s about $300 for me to replace the ice maker. There are 2 screws in there. You do it and  you plan to do it about every 6 – 8 months. Vince found new ice makers for this fridge (LG fridge but the least expensive place to buy the ice maker was through Sears). He ordered two of them ($85 each). They came Thursday as he was leaving home to go back to work after lunch. He said he would try to change it real quick before going back to work. It took him probably 2 minutes and that’s only because it took a minute to get the ice bucket out. You have to hold your mouth just right, and apparently say just the right number of four letter words, to get it to come out of that drawer. 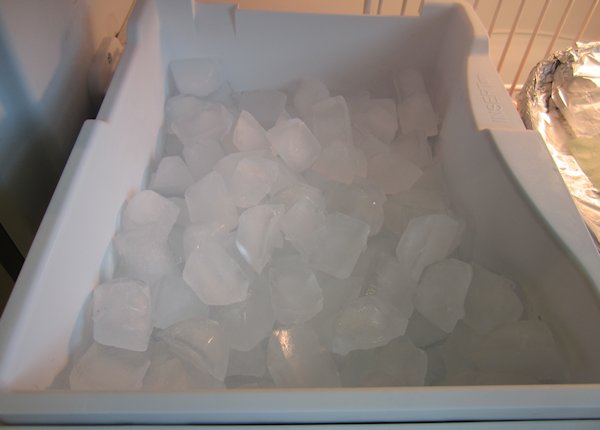 Look at all that ice! Individual cubes . . no huge globs of ice!  No chipping ice out of the bucket because the cubes had all frozen together.  For about all my adult life I suppose, I’ve had ice makers that work and I take that for granted. I never thought much about how convenient it is to have an ice maker that works . . but now I do.

I was telling the repairman that I wished we had ice and water on the door and he said “don’t even think about it!” because of our water.  We are having the water here tested for some kind of custom designed water softener system and we should have that installed within a month or so. I don’t know how much difference it will make since we already have a water softener that seems to be working good but we’ll try anything . . or so it seems!