This evening we moved Della into the little coop that we use for the chicken jail or hospital . . whenever we need to separate a chicken for whatever reason, we put them in there. It’s big enough for four full size chickens and for tonight at least, she will be in there by herself. She isn’t happy being in there alone but at least she’s safe from those mean read hens and sex starved Iowa Blue roosters!

Most of the evening, I carried her around  . . holding her while doing my outside chores. She’s perfectly happy to be held. I told Vince they make chicken diapers and . . well,  you don’t want to know what he said but I think what he meant, was:  NO CHICKENS IN THE HOUSE!

Tomorrow,  if the Dominique chickens lay, I will give her some fertile eggs and she can sit on those if she wants. We’re thinking about putting this little guy in there with her. 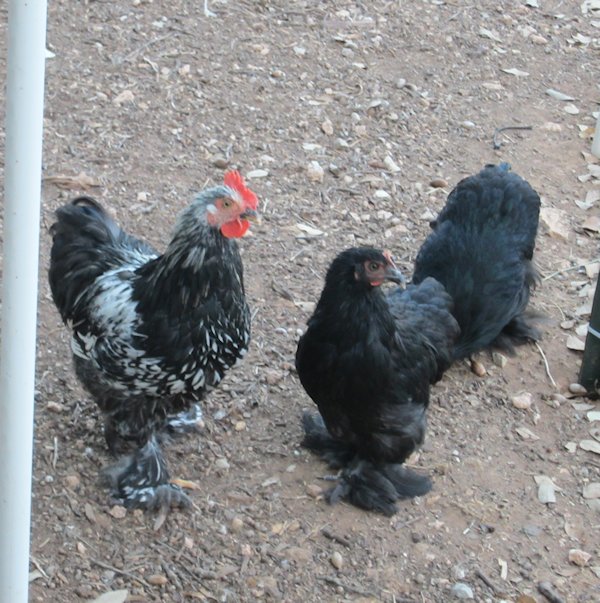 It’s the one on the left. I’m not sure if it’s a boy or a girl. At first, I thought boy because of the beard and comb but the other roosters have started crowing and doing other rooster “things” and this one hasn’t. Also, I’m not sure what it is . . a cochin of some kind . . splash maybe? Definitely a bantam. One thing I do know is that he/she has the sweetest personality. He seems to be a real kind hearted little guy. He loves Vince and will follow along after him all day. He isn’t as crazy about me but he’s nice to me. He’s named Petunia, so I guess I hope he’s a she but he kinda looks like a skunk from a distance. Anyway, he’s a loner. Most of the time, he’s by himself and he even sleeps away from the other chickens so he might be a good companion for Della.