It’s kinda almost unbelievable how much trouble we have with ice makers. We bought the current fridge/freezer when we moved here 2-1/2 years ago but the first 4 months, we didn’t have the ice maker hooked up because the water wasn’t good at the rental. In the 14 months or so that we’ve the ice maker hooked up, it’s been repaired/replaced I don’t know how many times.

In addition to the fridge in the house, over in the shop, we have:

So, I really wasn’t looking forward to moving the house fridge with the non-working ice maker to the shop and getting yet another full size fridge. That’s a whole lot of electricity when we’re trying to cut back on our usage, and we really need a third big upright freezer for the meat since we prefer to buy a half a cow from a local farmer, a pig from a local farmer and then get a few deer each year. But, what else can you do when your ice maker keeps going out?

Really, with those bottom freezers, since the drawers slide in and out, I can’t even imagine how messy it would be to have ice trays in there . . close the drawer and half the water would slosh out.

Home Depot is having an appliance sale so I said . . let’s go buy a new fridge! Vince wasn’t happy but I was so tired of dealing with never having ice that he agreed to go buy a new fridge. We went Friday and looked at them all. I Swore I’d never get another bottom freezer fridge but the way our fridge is up against the wall, with a window, with a deep windowsill, we almost have to get a bottom freezer. We had just about decided which one to get on Friday night but then we wanted to come home and do more research.

Then we went back yesterday and looked again and changed our mind about which one to get but we had the repairman coming out to work on the oven and the ice maker today so we waited til we talked to him about which fridge he recommended. While here, he broke the news to us . . it’s our water!  Too much lime is causing the problem and if we want an ice maker, we’re going to have to plan on replacing it about every 6 months or, we can install some fancy water filtration system that costs about $3,000.

Neither of those options sounds great but he did tell us that our current freezer is about the easiest there is as far as changing the ice maker, so we ordered a new ice maker, and a spare and we’ll just change ice makers every 6 months. That’s better than switching to water we have to pay for. We do have a water softener and apparently that helps a lot. The other night when I was canning, I filled the canner with a water house from outside (water that hadn’t gone through a filter or water softener) and I ended up with about 1/4″ of powdered lime (or something white) on all the jars! It was pretty unbelievable how much was in a small amount of water.

Next option . . order a free standing ice maker. Our laundry room has a water line for an ice maker. We looked online, found one that makes nugget ice (like Sonic) and were just fixing to order it and I said to Vince .. better check that water line and make sure it works. We’ve never used it. Nope, it doesn’t work!  Somewhere, there HAS to be a turn on valve but we don’t know where. Vince thinks maybe it’s in the attic but we aren’t about to go up there when it’s this hot.

Strike 2!  Next option . . order a tiny freezer, stick it in the laundry room and fill it full of ice trays. 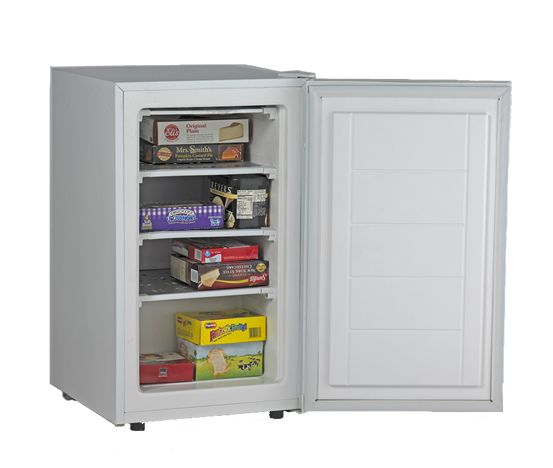 That’s what we did. I’ll stick it in the laundry room, put ice trays on it and maybe use it for the meat I bring over out of the big freezers each week. It isn’t the best solution but it’s about the least expensive, easiest, quickest fix.

During veggie season, when I’m using lots of ice, either blanching veggies or skinning tomatoes, so I end up freezing water in Solo cups so I can have big chunks of ice. This will work perfectly for sticking a few of those cups in there and keeping that ice handy.

Way too much time has been spent trying to figure out what to do with this fridge/ice maker situation and I’m happy to have the decision made, to have extra ice makers coming and hopefully have ice . . because it’s real hot around here! 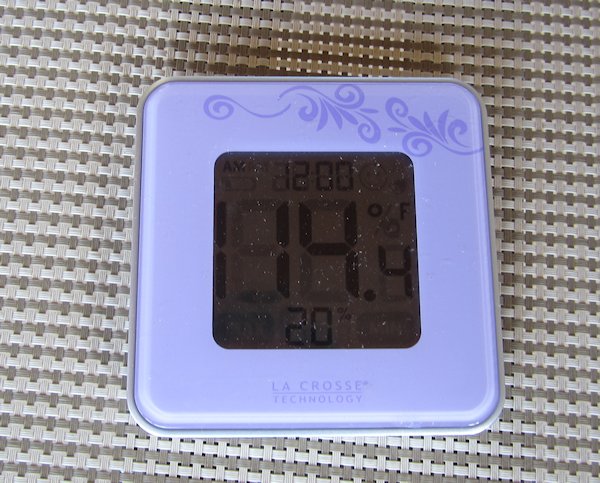 That says 114.4º on my dusty outside thermometer!