We’re having a cloudy, drizzly Sunday and it’s all I can do to keep from curling up with my Kindle and falling asleep!  While we were on vacation, I took a nap every afternoon and it would be so easy to keep doing that but .. there’s too much to do and not enough time as it is.

Poor Vince . . right after lunch, he went out to cut the grass because he thought it might rain this afternoon and he had made about two trips around the house when the bottom fell out.  It only rained a few minutes but the grass was wet enough that he didn’t want to keep cutting it. Then he went to move some dirt with the tractor. He said it hadn’t rained enough that the dirt would be too wet to move and as soon as he got the tractor out and where he needed to work, the bottom fell out again! 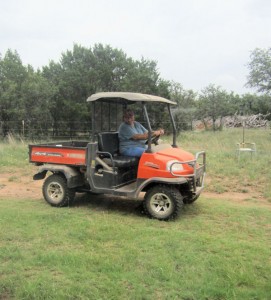 Heading to the Woods

He decided there was something he could do out in the woods with the RTV so in between showers, he took off in it. He passed by the sewing room and I snapped this picture through the storm door!

I can hear him out in the woods now and if I had to guess, I’d say he came back and traded the RTV for the tractor but I’m staying in where it’s nice and cool.  We’re not used to humidity and after several little showers, it seems very humid out there.

Don’t think I’m complaining about the rain. I am so thankful for whatever amount we get. Last year, I think we cut the grass twice the entire summer and I believe he’s already cut it at least half a dozen times this year. That’s a testament to how much rain we’ve had!  We’re still in a drought, we still have water restrictions and the lake is still way down but it’s such a great improvement over the previous three summers we’ve been here.

If you live where you get sufficient rain, you may not even notice how green our grass (weeds) are but everything around here is green and that makes lots of folks happy!