When we got the new red chickens in January, I figured that the first week in June we would start getting eggs from them and sure enough, Thursday we got our first egg. A “pullet” is simply a young hen and the first eggs they lay are called “Pullet Eggs”. They’re usually quite small for a few weeks, then they seem to get huge and often have double yolks for a few weeks, then they even out and are consistent in size. Depending on the breed of chicken, just as some chickens lay brown, very dark brown, coral, white or blue/green eggs, the breed most often determines the size of the eggs also. 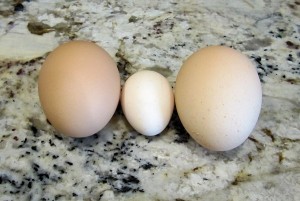 The egg in the middle is a “pullet egg” from one of the new red hens while the two eggs on the outside are eggs from the only two laying old red hens that I have left. 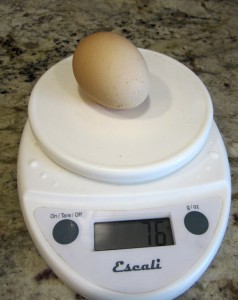 The large egg is 76 grams, or 2.68 ounces. The red chickens lay eggs anywhere from about 2.5 ounces to a little over 3 ounces. With grading for grocery store eggs, 2.5 ounces and over are considered jumbo eggs. 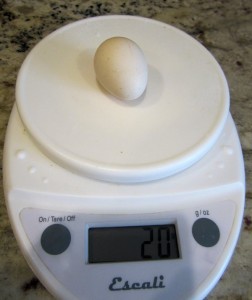 The small egg is 20 grams, or .7 ounces. Huge difference! By this time next week, the new chickens will all be laying at least medium sized eggs and probably by the next week, I’ll be getting a few double yolkers.

Sometimes, the tiny pullet eggs will have only the white and no yolk at all but this one had a yolk. I know because as soon as I weighed it, I dropped it and it broke, which reminded me of Chad’s Egg Letter from quite a few years ago.

Double yolk eggs are produced when two  yolks are produced too close together and end up being enclosed within the same shell. For anyone wanting a bit more details on egg production, here’s a good article at Backyard Chickens.

Sometimes when chickens get near the end of their egg laying cycle, they will lay double yolkers too. It’s kinda like . . in the beginning, their hormones are all screwed up and they don’t quite have it all figured out yet and too many yolks go into the eggs and in the end, they’re sick of laying eggs and begin dumping all the yolks just to get the egg laying years behind them!

You’ll never look at eggs the same, will you?