Through all my years of keeping first aid kits, either in vehicles or in the house, I’ve never had one of these: 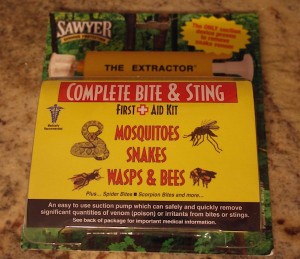 Though I hope we never need it for the snake bite, I figure the odds are becoming greater each day that sooner or later, one of us may get bit.

We also bought bags and bags of moth balls. Some say putting them around the chicken coop, but out of reach of the chickens, will deter snakes. Some say it won’t but I figure it’s worth a try. Some said to put an electric wire around the coop, but also out of reach of the chickens but there’s too much dry grass and we have too much risk already of wild fires, I’m not willing to take a chance on a spark causing a fire.

We’ve checked the coops and can’t find a place where snakes are getting in, except through the chicken door, which remains open during the day so they can go in and out of the coops. We’re checking the coops in the evening when the chickens go in to be sure there are no snakes and we’re not closing the chickens and the snakes up in the coops.

About the time I think the snakes are going to send me packing, last night while finishing up dinner, we sat at the table and watched the wild turkeys out wandering around and this morning I walked out with Speck and there was a big old jack rabbit just outside the fence. When I first caught a glimpse of it, I thought it was a fawn but then saw the huge ears. This is still a fun and interesting place to live . . so long as I’m wearing boots and have a pistol within reach and a shovel in my hand!