I promise . . til we get electric bills reflecting the solar use, I won’t do another post about the solar panels but some folks are interested and are thinking about doing it and I know . . some of you are not interested at all, but since I blog about life . . this is part of life around here.

There’s so much I don’t know so if there’s anyone out there who really knows about solar panels, you’re probably laughing at what I’m writing but this is my understanding, and I assure you . . it’s very lacking!  🙂

We went with the micro inverters manufactured by Solar Bridge and through Solar Bridge, we’re able to watch the output of each panel real time. It’s so interesting. This is how we will know when the panels are dirty and need to be cleaned . . we will see diminished output. We also know when any of the panels are having issues.

We have 3 rows of 12 panels for a total of 36 panels. The number of panels isn’t as important as the wattage of the panels. There are panels as small (or maybe smaller) as 12 watts. Ours are 250 watts each.  There are solar calculators available online to calculate the size system you need, depending on the number of solar hours in your location and the amount of power needed. We sized our system so that we should never have to pay for electricity, though this summer, we will probably have some small bills because we will not have built up enough credits yet.

We have this neat little graphic that we can see any time.

The system was hooked up and turned on last Thursday but we could only run it long enough to test it. The electric company had to come out and inspect, approve and change out our meter. We ran the system through Saturday and turned it off. The electric company came Tuesday and approved everything. When we turned it back on, two panels weren’t communicating. Can you see the two black panels? Those were not working. The solar people (Longhorn Solar) assured us they were producing power but were not communicating with them and, according to our numbers at the end of the day, I think they were correct.

We had to turn the breaker off, wait a few seconds and turn it back on . . then all the panels were working/communicating. 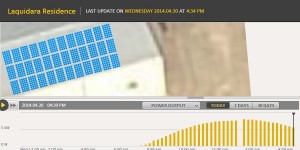 This is what it looks like with all the panels working (and the spelling of our name corrected!). You can see the yellow graph that shows the amount of power produced. The gap in the middle of the day (from 1:00 to 1:30 p.m.) was when I had to turn the system off and let it re-boot and re-establish communications.