When Chad and Nicole first started dating, or . . should I say . . when I first became aware that they were dating, one of the things I asked Nicole was “Do you sew?” Her response:  “Why would I?”

Later on, after they had been dating a while, I wanted to make her a quilt and asked her about her favorite color and she said “Anything but purple! I do not like purple at all!”

It was time for Chad and I to have a serious discussion! He was dating a girl who had no interest in sewing and didn’t like purple. This could not happen in our family.

Somehow through the years, maybe because Nicole fell in love with quilts, or maybe because boredom is about to overtake her, but she decided she would try quilting. In July, she started and has almost finished a grandmother’s flower garden (hexies) that she is piecing by hand using the paper. Later, she decided she wanted to make a quilt on the machine so I got her all set up with all the supplies she would need. On my last visit to MO, I took Nicole an older Kenmore machine that I had. I thought she might like it because it did a few decorative stitches and she might some day want to sew for Addie but she fell in love with the Singer 301 machine that I had brought to use so I could sew along with her. 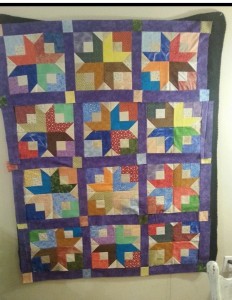 Last night she posted the photo of her quilt so far. First . . she’s sewing and she’s loving it!  Second, she’s using my old Singer 301 (which I guess technically belongs to her now!) and she’s  using Bonnie Hunter’s Boxy Stars pattern. I’ve known Bonnie for many years. I can’t even remember how long but I bought my first APQS longarm in 2000 or 2001 and I remember sitting and talking on the phone with Bonnie about longarm quilting before buying that machine.

It’s nice . . the sewing machine, the purple and a pattern designed and written by a friend. Nicole is such a great daughter-in-law! She truly is the daughter I never had. Sometimes I wonder if Chad feels left out. I talk to Nicole way more than I talk to him but he’s either working or sleeping. When I send packages to them, it’s either stuff for Addie or something sewing or knitting related for Nicole. I guess I need to make a point to send something special to Chad. Hes’ a great son and I surely don’t want him to feel left out.