Once upon a time, I was the shopper who bought what I needed for our groceries for a week. If something happened to be on sale, that was fine but it wasn’t a priority. These days, I rarely buy anything that isn’t on sale and when I find things on sale that I know keep well, I stock up. It’s sometimes hard for me to understand that not everyone does things the way I do, nor do they want to do things the way I do but it’s so nice not only buying things on sale, but also having so much of what I need in my own pantry. 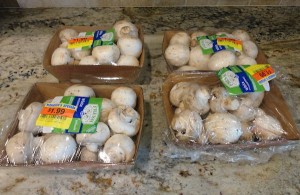 A couple of days ago, I was again talking to my friend, Judy, and she mentioned dehydrating mushrooms. That is one ingredient that I either need for a recipe and don’t have, or I buy them and either don’t use them before they go bad or only use part of them and the rest of them go bad. After talking with Judy, I grabbed my Kroger ad and there were no mushrooms on sale but when Vince and I were out Thursday and we went by Kroger for a few things, I looked to see what the price of mushrooms was and there they were . . marked down mushrooms. The “use by” date was still a couple of days away but they were marked down from $3.99 to $1.99 so I bought all four packages that were marked down.

I didn’t want to run the dehydrator for 4 or 5 hours half full so I cut a bunch of green onions from the garden and sliced them to fill up the dehydrator.

Ready for the Dehydrator

It ended up that the mushrooms filled the dehydrator and there were enough left over to fill a couple of shelves for a second batch. 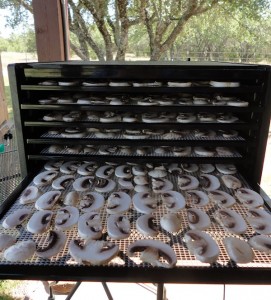 The onions dry more quickly than do the mushrooms so when these photos were taken, there were still mushrooms in the dehydrator. 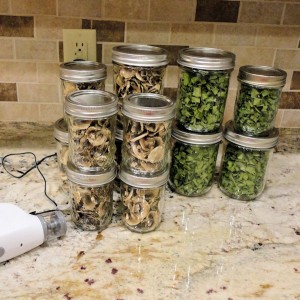 By the time everything was finished, I had 4 pints and 5 half pints of mushrooms, 3 pints and one half pint of green onions. They were vacuum sealed in jars once they were cooled. When I need these, I’ll pop the seal, use what I want, re-seal the lid and they will keep for several years without a diminution in flavor.

Once the veggies are dehydrated, I could also put them in the blender and pulverize them into a powder, and sometimes I do it that way.

When I’m ready to use these, I can either sprinkle them directly into a dish, or soak them in warm water to rehydrate them, drain  them and use them as I would fresh ones.

There are enough green onions in the garden now that if I dehydrated them all, they would last me through at least one year. It would be really frustrating for me if I didn’t save them and then during the winter, I had to purchase those little packages of sad looking green onions for over $1 for a dozen or so green onion blades. Just a little work and I’ll have home grown, pesticide free, never touched by anyone’s hands but my own green onions til next year’s crop is ready and we can start the process all over again.

We have used the Excalibur dehydrator for several years and we use it a lot during the summer. Often I have several loads of items waiting to be dehydrated and sometimes keep it running day and night so yesterday I ordered a second one. That’s how much we love the Excalibur!  I got the 3900B, which is a newer model than the one I currently use. Still 9 drawers . . everything is pretty much the same. They do have the same model with an upgrade – a timer that can be set. It costs a little more and I’m not sure why it’s needed. I don’t see how you would really burn anything in it . . even if I had to leave the house and it dehydrated for an hour or so more than I had planned, it wouldn’t hurt most things. Also, I use mine on the front porch and if it goes off, there’s a chance of bugs getting in there so if there’s food in it, it’s running. Therefore, I didn’t spend the extra money to get the model with the timer.

Most of us who use the Excalibur have used other models previously and I think any Excalibur user will tell you they are one of the best dehydrators out there. If you do much dehydrating at all, I think you would be absolutely in love with an Excalibur.