I believe that everything happens for a reason. I believe things often happen to us, or for us, that are meant to be shared, to help others along the way or maybe to keep others from making the same mistakes we make. So often, as a Christian, I believe things happen that could not have happened except for divine intervention. Sometimes the things are so small that I feel a bit odd attributing the occurrence to God but often, things happen in my life that leave me wondering how anyone would not believe in God. I’m not saying you’re wrong if you don’t believe, I’m simply saying . . in my life, it’s real and cannot be ignored.

I often think back to when we moved here and the trouble we had finding a house to buy. For those who were following my blog back then (2011), it went from being sad, to frustrating to comical  . . we made offers on probably a dozen houses and some failed inspections, some the owners decided not to sell, some the inspections found issues and the homeowner refused to fix the problems but it was a pretty  unbelievable experience and we ended up renting, only because the guy who was doing our inspections had mercy on us and let us move into a house he had for sale that had not sold. Then when we found this place, and in the 2-1/2 years we’ve lived here, I believe without a doubt that this is the perfect place for us and it wasn’t for sale when we first began looking, then when it was for sale, it was only with 20 acres and we wanted more but after a while, the owner was more agreeable to selling more land. Despite all the frustration of having deal after deal fall through on houses, I’m so glad we ended up with the house we ended up with.

A few months ago, I felt moved to write an elderly lady who had been a positive influence in my life when I was very young. I wasn’t even sure what to write but I wrote her and told her how much I appreciated the things she had done for me and how often I thought of her, and that I knew there were numerous folks about my age who had been influenced positively by this lady.  She wrote me back, thanking me for my note, and then a couple of weeks ago, the lady got very ill, and passed away. I am so thankful that I had the opportunity, and took the opportunity, to write her and thank her.

Even something as insignificant as knitting stitch markers . . last week, I was reading a friend’s blog and looking at stitch markers she had purchased. I only have the cheap little plastic round stitch markers, which work fine, but they’re not cute! We’ve had a busy weekend and this morning I was looking at markers on Etsy and there were so many cute ones, I was overwhelmed and then it got time for lunch and I never went back to it, but I really was going to do it. I just got back from getting our mail and the friend sent me a package of stitch markers. 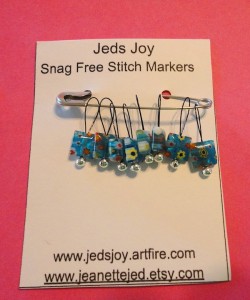 I’m not saying I hear voices, but I do sometimes feel the urge to do something. I don’t always do it, often I totally forget about the things I mean to do but I’m going to make more of an effort to do the things that cross through my mind . . especially when it involves doing something for someone else. I believe those “urges” are an opportunity to bless someone and in today’s world, we can all use extra blessings!