You’ve heard me say it before but I’d rather have bread and water at home than go out to eat. First, eating out is outrageously expensive. Second, when Vince gets home from work, I enjoy sitting and spending time with him during dinner. With the chores we have to do around here, once he gets home from work, does the chores and whatever else has to be done, we don’t get enough time to talk. When we’re in a restaurant, I feel like we have to be so guarded in what we say because we don’t know the people around us and . . well, we’re just careful what we talk about when we’re in public. Last, the food at home is ALWAYS better than what we get out.

I do enjoy eating sushi out because I can’t get the ingredients to make that at home. We’ve been eating out too much lately because we’ve been in town so much in the evenings that it’s just hard to do everything we have to do out and get back in time to eat at a decent hour so we’ll do a but of shopping, eat, and finish up the shopping but . . it’s gotten old and I’m ready to be eating at home instead of eating out.

We’ve had a huge “thing” hanging over our heads . . one of those things that you really must make the right decision and it could have positive or negative repercussions or many years and we finally got that behind us. Then yesterday after the solar panel guys left, Vince said “Let’s go to Brady and get fried oysters.” It’s about an hour down there and I hadn’t planned on doing that but knew he wanted to unwind a little so we went. On the way home, Vince said “It’s too bad you can’t fry oysters at home because I really like fried oysters.”  Huh?  I can fry oysters at home and I make darned good fried oysters!

A year or so ago, Vince bought a “Fry Daddy”. I can’t remember why he bought it but I remember being in Wal-Mart saying “NO! Don’t buy it! I don’t fry anything!” Poor Fry Daddy . . still sitting in the shop in a box. I told Vince that we could buy oysters and put the Fry Daddy on the front porch and I would fry them up this weekend.

At lunch today . . yes, we had errands to run and ended up eating lunch out. I told Vince “Let’s run by Kroger and get some oysters.” 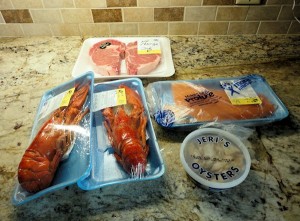 Dinner for the Week

Looks like we were hungry for seafood. Lobster. Salmon. Oysters. And . . two steaks looking like they landed in the wrong cart. 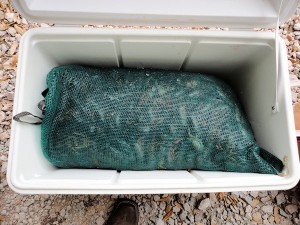 Normally we have to order crawfish on Monday, Kroger places their order on Wednesday and the crawfish arrive on Friday. The friendly meat guy told Vince “I have an extra sack of crawfish!” What a bonanza!  We weren’t expecting that but yes, sir . . we’ll take them!

I figure we’ll have crawfish tonight, and then peel the leftover tails and I’ll get probably 5 bags of tails for the freezer so the crawfish counts as 6 meals. That means we got 10 really, really good meals worth of meat and the cost comes to an average of about $12/meal. It’s more than a lot of things like chicken or ground beef but where could you get a meal of boiled crawfish, or lobster or fried oysters for two for $12? And . . we get to eat it at home!

With the veggies in the freezer or canned from last year’s garden, and with lettuce in the garden now, the cost of the meat is about all the cost we have.