WARNING:  If you don’t like snakes . . don’t read any farther!

I was just out in the garden checking the damage . . even though I said I wasn’t even going to look at it for a few days. 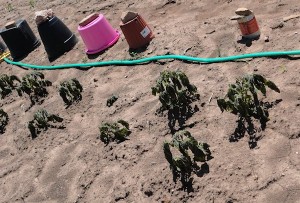 The potatoes that weren’t covered are probably lost but tomorrow, I’m going to snip off all this part and see if they will grow new sprouts.  It was supposed to be 32º last night but was 26º when I got up just before daylight. Vince and I got up a little before 2 a.m. to watch the eclipse and it was 35º then so I was still hoping that it wouldn’t drop below freezing but it did and . . life goes on.  It’s supposed to be 34º tonight so I’ll just wait til tomorrow and then remove the buckets, clean up the dead and . . life goes on!  Everything that was covered looks good. The strawberries don’t look bad. The asparagus looks fine. The figs are damaged but I think they will sprout back new growth. 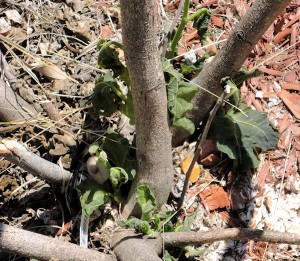 Speaking of life going on . . this little frog better be thanking his lucky stars that I came along and that I didn’t have on my flip flops!  I was wearing my boots, which happens more and more these days. I looked down . . and saw this: 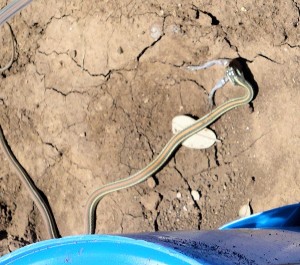 Snake With a Frog

It was a ribbon snake and he was trying to eat this poor little frog so I stepped on the snake up close to his head and the frog popped out and hopped away. 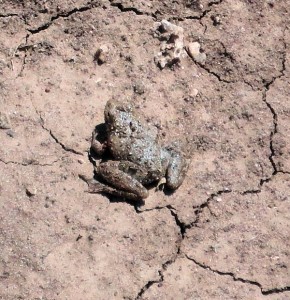 I don’t know if he will survive . . whether the snake had bit him or not but at least I tried to save him.

Surely something good will come to those who step on a snake to save a frog, right?