Good morning!  Have you had breakfast yet?  No?  Good!  Grab yourself a bowl of oatmeal or a piece of toast!  You might want to finish eating before reading any farther!  🙂

When I decided to raise mealworms, I read about what they eat, how to build their “home”, the temperature I should maintain for them. I did not read that they shed their skin a million times. As I mentioned before, I thought I had killed about 2/3 of them because I kept finding dried, shriveled up skins and I thought that was the remains of dead mealworms. Here’s a photo of one of the worms shedding its skin. 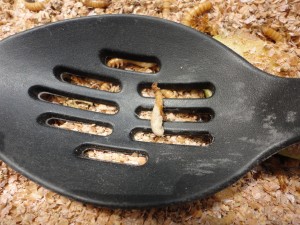 After accidentally almost drowning them all, on Tuesday I cleaned out their “home” (which is a Rubbermaid box).  When I saw how many beetles were in there, I realized they must be doing pretty good! 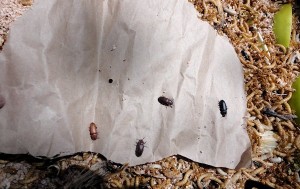 I had planned to transfer all the beetles, larvae, and worms to a clean, dry “home” but then I thought about the eggs? I don’t even know if I can see the eggs and I didn’t want to dump all them so I transferred the beetles, larva and worms and then left the bedding (which is wheat bran and chicken crumbles) in a partially sunny location, stirred it several times and soon it was dry so I dumped it in with the clean bedding. 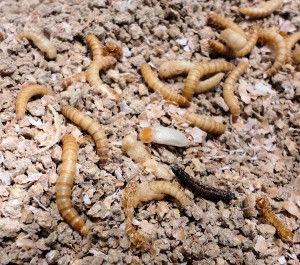 Above, you can see several of the “skins” that have been shed. I read that they can shed the skin up to 20 times! They are at the worm (or larva) stage for about 10 weeks.  Then they turn into a pupa. There are lots of opinions about how long they stay at the pupa stage. I’m guessing 2 to 3 weeks. 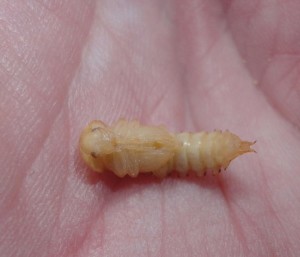 Then they hatch into a beetle. They start out white. 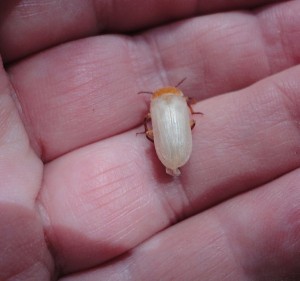 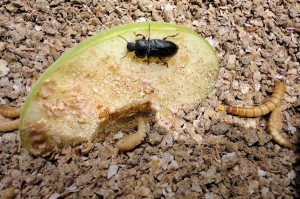 Then . . the beetle lays eggs and then it dies. The beetle lives about 8 – 12 weeks. That, my friends, is the life cycle of a meal worm.

Aren’t you glad you ate breakfast before you started reading this?  🙂