Getting too many sets of chickens combined has been so darned frustrating. If you’ve never combined chickens, you know it isn’t as easy as it seems it should be. They have “pecking order” and it’s real! They don’t give up their position easily.  The best way we’ve found is to put the two groups right next to each other with just a fence between them and let them get kinda used to each other so that’s what we did for the red hens and the bantams that hatched out in December. That was going to give us 11 hens in the left side of the chicken condo. In the big coop, we have the 13 new chicks and we’re going to try to add the 3 that we got at Tractor Supply. In the right side of the chicken condo are 2 Dominique hens and a huge Dominique rooster, Wilbur. 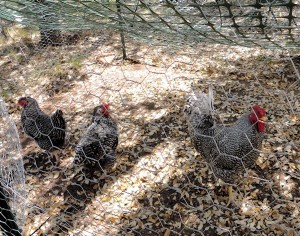 Wilbur and His Ladies

Wilbur is huge! Vince guesses he’s about 9 pounds. I think he’s as big as a turkey but Vince says no! He has the longest spurs and he looks at me like he wants to kill me but he loves Vince! Vince says “Wilbur is such a gentle rooster!” Huh? He’s just waiting for the opportunity to cut my jugular vein with his spurs! Wilbur is very sweet to his two ladies. When I give them treats, no matter how much I give them, Wilbur will never eat any til the girls have had their fill. If he finds a bug, he makes his little “come and get it” sound and they come running for it. The day the dogs attacked, when I looked in at these three chickens, Wilbur was between the two hens doing his best to protect them.

But we weren’t sure how Wilbur might react to new chickens coming in and even though it seems unfair to have only three chickens in that coop and 11 on the other side, even though the coops are the same size, that’s how it had to be because of Wilbur.

Several weeks ago we combined the red hens with the bantam babies and everyone was ok . . standoffish but ok . . except the one red hen so we put her in isolation. This is the picture I posted a few weeks ago of the one chicken in the pen by herself. 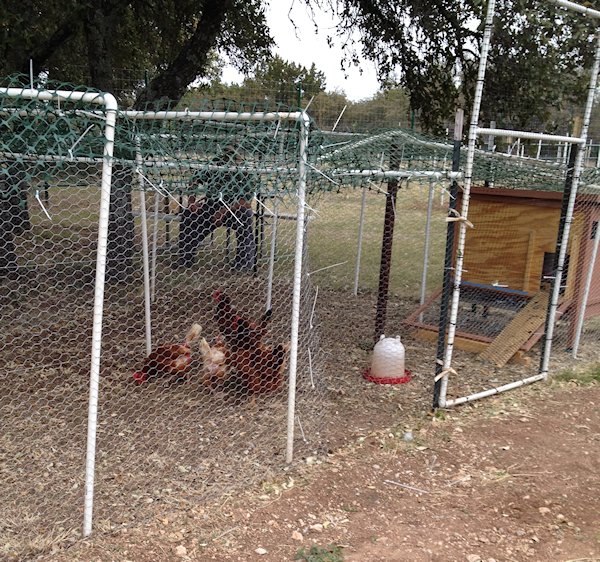 I left her in the coop/run by herself for several days, and then hoping she had learned to be nice, I put her back in with the bantams but no . . she was still mean so I took her out again, explained to her how I make gumbo and put her back in isolation for a little over a week. We really need that little coop to get the three babies next to the 13 other chickens so we can get them all combined but I can’t use that coop as long as this chicken is in it. Thursday I said to them “You’re just going to have to work it out among yourselves” and I put her back in with the bantams. It wasn’t long til Vince came in and said “It isn’t working out there!” so back in isolation she went.

The little coop was then moved over by the big coop and a new little fence was built around it. 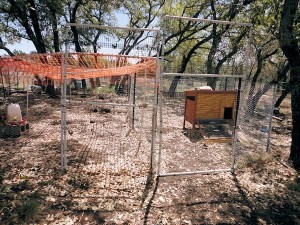 Today we’ll move the three latest additions in there so they can get used to the 10 little red hens and the 3 Black Tailed White Japanese bantams. I tried to get a good picture of those three but couldn’t. 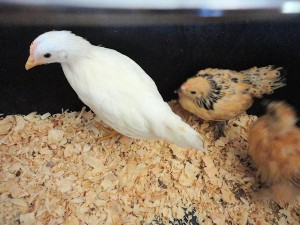 These are the three that we bought at Tractor Supply this year. The white one is the white leghorn and someone had bought all the hens and left her all by herself. I never thought white leghorns were pretty but she is so sparkling white and she is a very kind hearted chicken. She is so sweet to the two little birds. The one that’s kinda blurry is a Silky. I should have known better . . all Silkies want to do is hatch babies but she’s the one that had pasty butt and I knew she would die if we didn’t take her and help her.  The black and tan chicken . . that’s a cochin bantam. We got her because she was the only dark brown bantam in the whole bucket of chickens and she has turned out to be so pretty.. I love her coloring and hope to get a better picture of her once they’re outside. I wouldn’t mind getting another cochin bantam or two but . . no more chickens!  We currently have 30 but here’s how it breaks down:

So I have a total of 25 hens but 5 of those are old . . 2 have already quite laying, and 6 are bantams so I really only have 11 good laying hens. No matter how I try to write it out . . I have too many chickens!