Having four batches of chickens in four coops, really five because we still have three little ones inside the shop . . is a lot of trouble. It’s four doors to open in the morning. Four feed containers to fill every afternoon. Eight water containers to empty, clean and fill because they all have water inside and water outside. Then at the end of the day, it’s four batches of chickens to convince that it’s bed time and get them all closed up.

This morning we decided it was time to combine the remaining red hens and the 6 Silky bantams that had hatched from the eggs left behind. They had been in neighboring pens for several weeks. 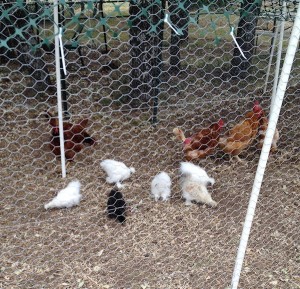 We moved the little fluffy ones in with the red ones and they all seemed to be fine, though they didn’t do much interaction. 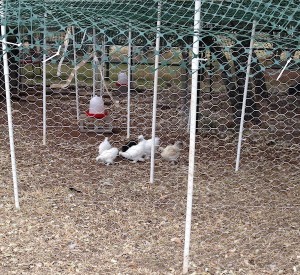 The bantams stayed together. 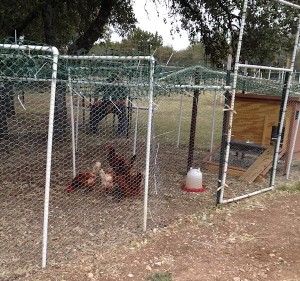 The red ones stayed together. Only one was mean and she kept running up to the bantams and jumping on them so she went to chicken jail. 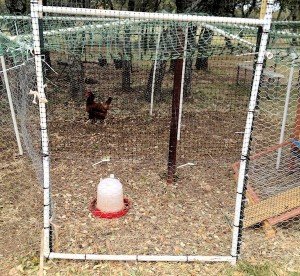 She’s in the old bantam pen all by herself. We’ll leave her there for a day or so and see if she can have an attitude adjustment.  If not . . it’s chicken gumbo time at my house!

The little chickens are growing so fast. This week we began letting them outside, within the safety of the fenced pen. They love to fly and flap their wings! 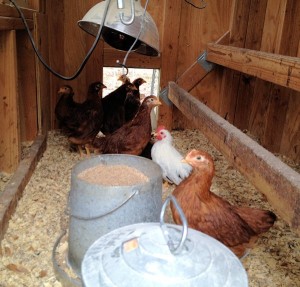 In just a little over two months, these girls should begin laying and I’ll be able to have all the eggs I need once again. They’re so pretty with their new feathers. The two little roosters that look like Roscoe are so funny to watch. They prance and strut around with their little short legs. I’m so glad I was able to get them. There are two roosters and one hen of that breed so I’m hoping we can get more babies from them.  Just what I need . . more chickens!