Eggplant is one of those vegetables that I’ve never been able to successfully freeze or can. I guess it’s more than I’m not happy with the results when I attempt to use the eggplant. Last summer, the garden produced so much eggplant that I figured . . what did I have to lose, and I made eggplant parmesan and froze it. I talked about it in this blog post.  We ended up with 24 containers of eggplant parmesan in the freezer.

I’m very happy with this method of putting up the eggplant. Not only was it a great way to save the eggplant, but by doing it when the garden was full of tomatoes and basil, those items didn’t have to be purchased or put up separately. Also, it’s very nice to have yummy eggplant parmesan ready to heat and eat!

Once the dishes were frozen solid, I removed them from the foil containers and vacuum sealed them. I was able to re-use four foil containers six different times to get the 24 containers since I wasn’t making all the eggplant at the same time.

When it’s time to cook one of them, I simply remove it from the freezer . . 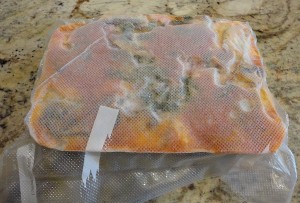 The frozen mass was placed in a greased cooking dish . . 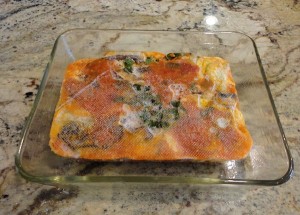 There is quite a bit of liquid that seeps out of the vegetables as it thaws but I pour that off. The first time, I stirred it back in and the dish was a bit runny but there seems to be no reduction in quality or taste by pouring off the excess liquid.

Once it’s defrosted, I bake it for about 30 minutes at 350º and it’s perfect. Each container of eggplant parmesan makes enough for us to have it for two meals. 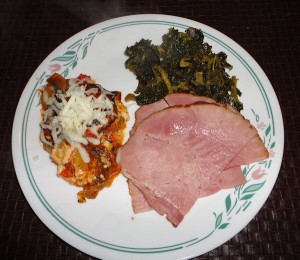