For those of us who have moved around a bit, we find regional type foods that we fall in love with and then have to jump through hoops to try to get when we moved out of the region.

When we moved to Kentucky, we were introduced to burgoo, which is pretty similar to an Irish stew, but in Kentucky, it’s mostly made with mutton. Having never eaten mutton, there was a ‘twang’ to it that I didn’t like. We lived there 9-1/2 years and at some point, I said to myself . . if I’m going to live here, I’m going to learn to like it and learn to like it I did and now I miss it so much!  Almost like gumbo in Louisiana, everyone’s burgoo tasted different and the one I liked most was at a local restaurant, The Moonlite.  Just thinking about eating there makes me want to make a trip back to Owensboro, KY.

Another thing we came to love while living in Kentucky was country ham. I had eaten that before but it was almost a staple in Kentucky. It was readily available in the grocery store and on lots of menus in local restaurants. We were able to get it some in Missouri but in Texas . . forget it!  I’ve looked for it when we were in larger cities and couldn’t find it anywhere.

While in Missouri, Chad told me that one of the Wal-Mart stores, about 30 miles from where he lives, had country ham. We went! I got 5 packages for Chad and 10 packages for us. 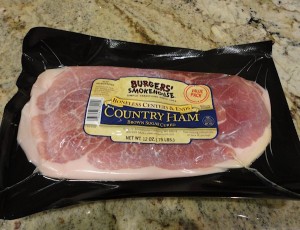 This weekend, we had a treat for breakfast . . country ham! 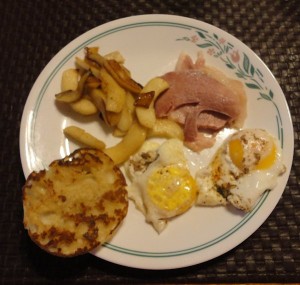 This is an interesting accounting of how to make a country ham. It seems like a lot of work and potential for problems with the curing time . . achieving the correct temperature and humidity so I think we’ll just buy our country ham.