Our research into solar power has resulted into both of us memorizing bar graphs as to our electrical usage over the past few years. It’s funny, at least to me, that we have never paid much attention to our electrical usage and the variations in our usage depending on what’s going on around here. These past few months, even though we mostly heat with wood, our electric use has been more than the two previous winters because of keeping heat lamps going almost non-stop on several batches of baby chicks, and keeping an electric heat pump going in the sewing room to keep Boots warm.  The critters are costly!

Even though I knew that canning generated a lot of heat in the kitchen, I never realized how much until I compared the energy used in the summers I was canning with the energy used in the summers when I didn’t have a garden and wasn’t canning. When the entire house gets so hot and steamy from several canners going, it takes a whole lot of air conditioning to get it cooled down. Often, I have two canners going for hours and hours. We have another gas stove hooked up in the shop . . the one that I used in the kitchen before getting the new stove, but it has wimpy BTUs and takes forever to get the canners up to the proper pressure.

My friend, CJ, cans on an electric hot plate so I was thinking about getting one of those and taking the canning operations out to the front porch.  I wrote her to ask about which one she uses and how long it takes to bring the canners up to pressure but then I decided it would surely be quicker to use a gas burner on the porch, vs. an electric burner. 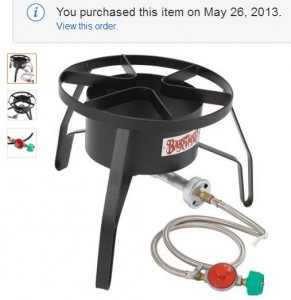 I found this burner by Bayou Classic, it has good reviews, and sufficient BTUs, higher than the burner on our gas grill. We can fill the smaller propane tanks from our larger tanks. I had looked at one outdoor cooker that had two burners but I figured using two canners would put them pretty close together and I don’t want to be trying to empty or unload one with the other one going while so close together. Besides, it’s less expensive to buy two than to buy one double burner.

I was just getting ready to order this burner when I looked at the top and it said “You purchased this item on May 26, 2013”.  Hmmm ..

Me:  Vince, do we have one of these?
Vince: Yep, we bought it for boiling crawfish. The one we had was kinda wimpy and I wanted a better one.
Me: Can I use it for canning on the front porch so we don’t heat up the house so much this summer?
Vince: Yes, I was going to suggest that!

Now I’m ready for something to can so I can see how it works. Here’s my plan:  I’ll do all the prep work inside, fill all the jars inside, bring them out on the front porch. I’ll have a table out there to use for loading and unloading the jars. I’ll let them cool on the front porch. Then I’ll load the filled jars into the plastic jar carrier in the back of the RTV and drive them over to the sewing room where they’re stored in the air conditioned pantry. Then, I’ll collapse inside my cool house, that has not been overheated by the canning operation.

That’s how it all should work . . time will tell if things work according to my plans! My only concern is . . as I’m going in and out dozens of times to check on the canner, will I let more cool air out and hot air in so as not to result in a savings at all?