There are several knitting related apps on my iPad. 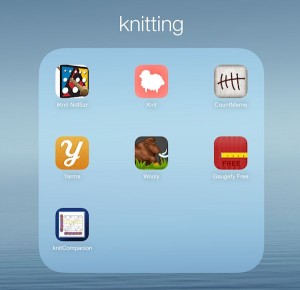 Honestly, I never used any of them. I had downloaded the free version of Knit Companion but had not paid much attention to it until last week when a friend asked me if I used it. She told me that there was a Ravelry group. I joined the group and began reading about the app and knew it was exactly what I had been wishing for.

If you’re a knitter, have an iPad or iPhone, this might be a great app for you.

I’ve just been using it for a few days but here are the things I love about it.

I love that I can keep all my current projects right on my iPad. I’m print the pattern, then lose it, but the worst thing is to take the yarn and needles with me somewhere, get there and realize I don’t have the pattern with me. Now, I can just be sure to bring the iPad, though I could also use this app on the iPhone. 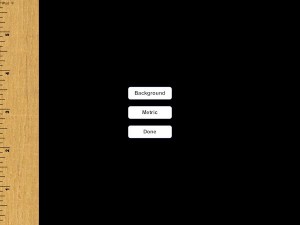 I’m able to set up the depth of each step so that I can click the up or down arrows and the next step becomes highlighted and I’m not having to search for my place on the page. 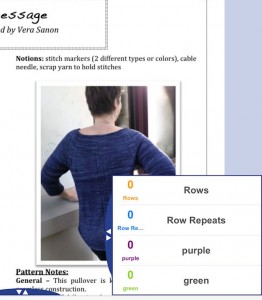 What I love most is the counter!  It is independent for each project. There are four options. They start off being named “Orange, Blue, Purple and Green” but you can re-name them. For Tressage, I’ve named one “Rows” and one “Row Repeats”.

Just the other day I was chatting with a blog reader and we were talking about how hard it is to keep track of our rows. I have several different row counters but as soon as I change projects, I have to make a note of where I was or stick a note to the row counter I was using for that particular project. If you use the click type row counters, you know how easy it is to click and accidentally moved forward two numbers or I’ve even dropped it and it changed numbers. With this app, you simply tap the color you’re wanting to change and it changes. You can easily edit the numbers . . back to zero or decrease one if you realized you shouldn’t have tapped that color.

I think the full version of the app is $15.99, which I gladly paid. I love this app! You can do more with the full version but I don’t even know what all the limitations are for the free version. I’m sure there’s so much more this app can do besides what I know or have written about. Please check it out.

Now I want an iPad mini that I can just drop in my purse or knitting bag. So far, Vince doesn’t seem real excited about that idea.