On weekday mornings, just as Vince is about to leave for work, it’s daylight enough to let the chickens out. A couple of days ago, I went to the duplex, opened the door for the three Dominique chickens, then opened the door for the 6 Silky adolescent chicks. Then I walked over to the big coop and let those few remaining red hens out. That’s my routine  . . every morning.

I noticed the bantams didn’t come racing out of the coop as they usually do.  By the time I got back to the house and went out with Speck, they still weren’t out so I decided I’d better go check on them. I wonder how long it takes after the chicken massacre before I quit expecting to find massive numbers of them dead again.

Very cautiously, I opened the big door to their coop, hoping I was not going to find 6 bodies. 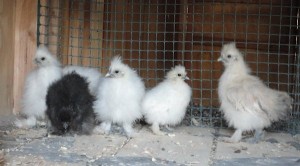 They were all ok but they were on the second floor and had no clue how to get down. 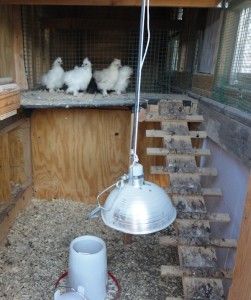 I wasn’t real crazy about the idea of going in and catching them. Once I grabbed one, the rest of them would probably go crazy and break their necks getting down so I left them alone and after about another hour, they had managed to find their way down and were all outside.

They have it down now. When I open the door in the morning, I can hear six little sets of wings flapping and them all landing on the floor below. If they had been raised by their mothers, they would have known how to get down. Poor little orphans!  🙂