This recipe works for our diet and once the prep work was done, it was amazingly quick to fix. It was served over shirataki noodles, which aren’t exactly paleo approved but spaghetti squash would work. The amount of prep work is well worth the effort since this dish is so quick to fix, with just one saucepan used for the sauce and a large skillet used for the main dish. And did I say . . it’s so delicious!

This would be equally delicious with chicken instead of shrimp. 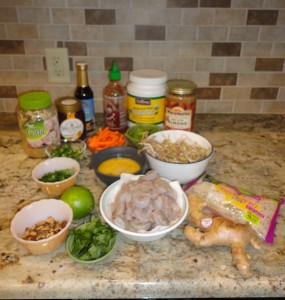 Combine the sauce ingredients and simmer gently til almond butter is melted. 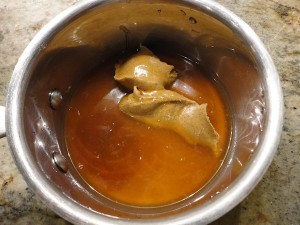 For main dish:
Add coconut oil to skillet and heat til melted and hot. 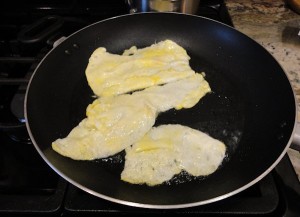 Pout beaten eggs into skill, cook on one side, flip, then remove to a plate and allow to cool. Once they’re cooled, coarsely chop. 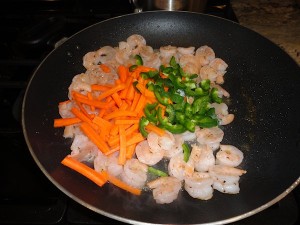 Add shrimp to hot oil in skillet and cook til shrimp are pink but not necessarily done. Add carrots and jalapeno peppers. Continue cooking for several minutes. 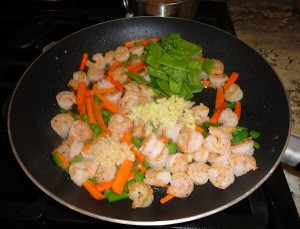 Add snow peas, garlic and ginger, cook for another minute.

Add the bean sprouts and stir just til hot.

Add eggs, green onions, and half of the cilantro. Stir. Add sauce and continue stirring til sauce is hot.

Serve over noodles, rice or spaghetti squash. Sprinkle remaining cilantro and toasted almonds over the dishes.