I almost forgot (on purpose maybe) the yarn report. The afternoon was spent in the garden and when Vince got home, he wanted to run to town and we just got back!

It was a rough week but I think almost everything has arrived except for one order that will be on next week’s report. I would say I’m done ordering but I know that no one believes me at this point. 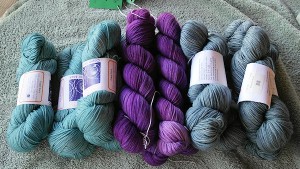 These possibilities are for Tressage.  I think I’m going to go with the one on the left, which is Caper Sock. The Bugga (purple) and the Anzula Squishy (denim on right) both have a little too much variation in color for the cables to show up as nice as I want them to show up. 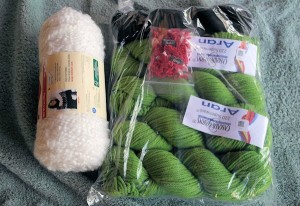 The above yarn is for Addie’s Sheep Sweater. 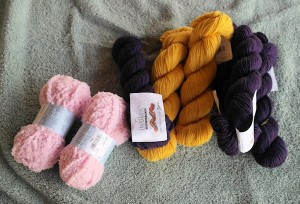 Purple and Gold for Addie

Chad is a huge LSU fan so the purple and gold is to make Go Buffalo! for Addie. The pink is more fluffy yarn for another sheep sweater for Addie . . later.

If you take into consideration that I bought 12 skeins of yarn for one sweater that only requires 4 skeins, and all the rest of the yarn is for sweaters for Addie, I haven’t done so bad. But, you can’t take all that into consideration except that I think I’m going to LOVE the sweater and if so, I’ll have enough yarn to make three of them . . which I probably won’t do but I’m trying to make myself feel better so please just agree with me!