We have never worn boots. You know how I love my flip flops and Vince loves his ugly Crocs. A year or so ago, I bought a pair of boots. At first, I wore them every now and then but once they were “broken in” and I got used to wearing them, I love them. I can hardly wait for them to get old so I don’t mind getting them muddy and dirty in the garden. They’re so much more comfortable than any of the muck or rubber boots I have. Almost every day, I put my boots on when I get dressed in the morning and don’t take them off all day. They’re so comfortable and I’m loving not having to worry about snakes or other critters biting my toes. They don’t have all that tread pattern on the bottom like tennis shoes so I can scrape them off on the boot scraper outside the door and not have to worry if I’ve stepped in raccoon poop (or worse) outside.

Vince has never wanted nice boots. He has some black lace up . . almost combat type boots . . that he wears while working outside but around Christmas he bought himself a pair of boots and then he ordered another pair. I kept telling him that you have to try on boots — you can’t order them but he found a good deal online and boots are not cheap, so he ordered them. They arrived yesterday while he was home at lunch.  He tried them on and said they were perfect . . which he would have said no matter how they felt because I told him it wouldn’t work and he was going to prove he could order online.

Anyway, he liked them so much that he wore them back to work and now . . my husband is wearing boots! 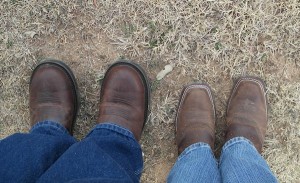 Here are our feet yesterday .. in our boots!  I have several pairs now but I keep wearing the sames ones because I love them the best!