The folks at Wisconsin Aluminum Foundry, where the All American Canners are made, are about the nicest and most helpful folks I’ve dealt with lately.  They do not sell parts for the canners, but those can all be ordered from Red Hill General Store. The folks at Red Hill know all about these canners and they’re friendly and polite and I recommend them for any parts you may need for the All American canners or any other canners.

If you love the old canners and especially the deal you may get on an older model, here’s a bit of info you may find useful. If I were out looking for a used model, these are the things I would want to know.  I did not know this before buying the used one this weekend and I was lucky. 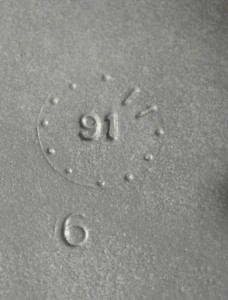 There is probably a date stamped either on the underneath side of the lid or on the bottom of the pot. The date stamp may be a letter and a numeral. A46 would have been manufactured in January, 1946.  (A = January, B = February and so on.)  As shown on the image above, it may be a clocklike stamp.  This is from my old pot that I purchased this weekend.  It was manufactured in June, 1991.

But, if I wait long enough, it will be brand new because if I turn my lid upside down . . 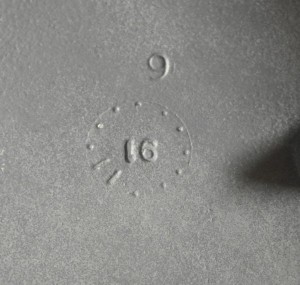 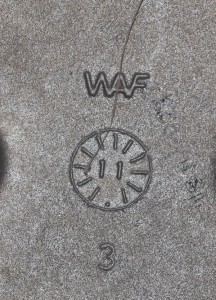 The one shown above was manufactured in March, 2011.

Pretty much everything on the canners can be replaced – handles, knobs, steam gauge, etc. What cannot be replaced is discussed below. Hopefully, you can click on the image below and make it large enough to read.

If you were to find a model with an excess pressure release plug that cannot be replaced, you could still buy a whole new lid with all new parts. As of now, the lid for the Model 910 is $62.99. The lids for the other models, except the largest one are $74.99. Since I paid $50 for the canner, I would not have been devastated had it been necessary to buy a new lid since I would still have had less than $120 invested and the new pots are $188. But, I’m happy that I’m able to make the old lid work by changing a few parts.

I am replacing the petcock with a vent pipe and pressure regulator weight.  We will remove the old petcock and replace it with the vent pipe and weight. I am replacing the old rubber overpressure plug with a new one simply because I don’t know if the old one is dry rotted and for $4.49, it’s worth it not to take a chance on ruining a batch of canned goods, and I ordered a new steam gauge, though I’m not sure I’ll use it.  I’ll probably just keep it for future use since it fits all my All American canners.  I invested about $46 so I’ll have about $100 in the new canner . . really about $85 since I’m not going to use the new gauge and that’s a heck of a lot better than paying $188.

I could have replaced the lid for just a few dollars more but did not because (1) I love the look of the older handle and knobs. That makes it stand out from my other AA canners and (2) these lids are thick aluminum and it seemed such a waste just to throw the old lid out . . which means I probably would not have thrown it out and would have had just one more thing to keep around.

About the gauges . . it is recommended that you have the gauges tested every year. County extension offices used to do this but many no longer perform this service. When I first started canning, I didn’t want a canner with a pressure regulator weight . . I only wanted the gauge. As I’ve learned more about canning, I feel the regulator weight is a whole lot more accurate. It’s kinda like in your car.  Modern drivers prefer lights for oil and temperature on their cars while us older folks prefer gauges. Lights don’t always work and they come on at a certain setting. Once you know your car, you learn what’s “normal” and you can catch any little deviation before you’re stranded .. hopefully.

Now, I just don’t trust it and won’t can any low acid foods using just a gauge. I have never had any of my regulators tested. Even when I did live where the county extension office provided the testing service, they usually charged $5 to test each one. I can buy a new one for $16.  It’s just too must trust to place in a piece of equipment when the weighted regulator works all the time . . every time.  Also, with the gauge, I have to go into the kitchen to keep checking on it. With the regulator weight, no matter where I am within a reasonable distance of the kitchen, I can hear it hissing and jiggling and know that my pressure is exactly where I need it to be.

This is the canner that I had used for years and I don’t use it much any more because it has only the gauge. 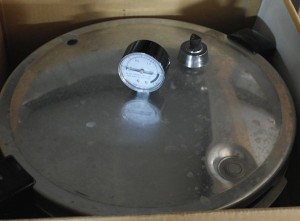 This is an old Mirro that my dad bought at a garage sale for next to nothing. It’s really old and I replaced the gasket on it .. probably spent less than $10 for a gasket and it’s good for another 10 years. 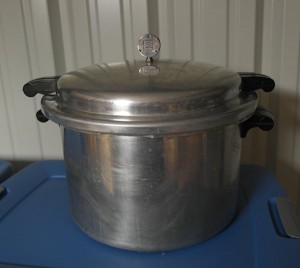 It has only the weighted regulator and I use it a lot. It was my preferred canner til I got the All American canners but I still love this old Mirro. I wish it could talk! I’d love to know about the ladies who have used it and what they canned. 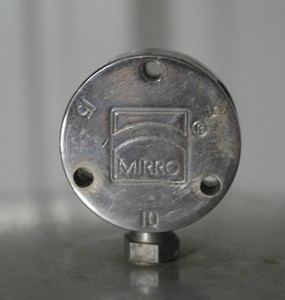 See the “5”, “10” and “15” on the weight? For non-canners (if you’re still reading), the weight is simply positioned on the little vent pipe with the appropriate hole over the vent pipe. Some things need 5 pounds presssure (psi), some things need 10 and some things need 15. It begins to jiggle and will jiggle gently at the correct pressure. Sounds so simple but it works great and I trust it completely.

Knowing what I know now that I didn’t know over the weekend . . if you find a good deal on an All American Canner:

We will all be watching the flea markets and ads for good deals on All American canners.  This may have just bumped old sewing machines down a notch on my “try to find list”.