We’re actually not being 100% “paleo” but we’re probably being about 95% “paleo” so, make your own food choices and don’t do what we’re doing necessarily.

This afternoon, I’m going to make several different types of paleo gluten free muffins and freeze them individually.  I will take several of them out of the freezer each night and we can have those in the morning, with butter, fruit and nuts and bacon or sausage.

Saturday morning, I made Pumpkin Pancakes. They were interesting . . as in different from what we normally eat. I doubt you find them at iHop but we’ll eat them again. 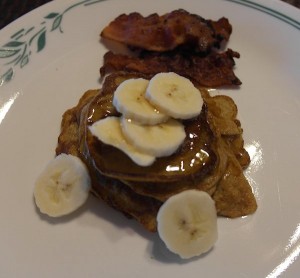 We had them with a few banana slices, a splash of maple syrup (about 1/4 of my usual amount of maple syrup) and bacon. Vince said he would eat them again so that’s a good thing.

What I loved about them is that the recipe made just enough for the two of us. The recipe said to make them small because they don’t flip well . . they’re more egg than flour . . so I made them small and they were easy enough to flip. We ate them around 7 a.m. and didn’t get to eat lunch til after 2 p.m. and though we were starving by 2, the breakfast would have been good til noon. 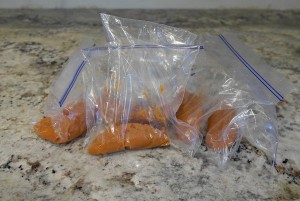 Since the pancakes only used 1/4 cup of pumpkin, one can is enough for 7 batches of pancakes. I just dumped 1/4 cup into zipper bags, put all of those into one large freezer bag and will pull out a small bag as needed.