This is definitely the last yarn report for 2013 so I’m calling it Week 52 . . even though Week 51 got lost somewhere along the way.

Big changes are coming in my yarn buying habits so my reports will probably not be nearly so entertaining beginning next week!

Yarn came in this week and there’s yarn that’s going to be delivered before the end of the year so I’m counting it all on this week’s report. No use sullying up next year’s Week 1 report, right?  If it gets here during 2013, then I’m counting it for 2013, by golly!

Some yarn is here but because we have company coming, I’ve already packed it away without getting a picture and some just isn’t here yet.

Before we get too far into this . . nothing was used! 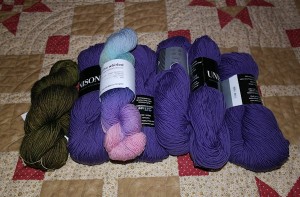