Friday I was going to the grocery store and I told him . . if there’s anything you’re going to want from the store between now and about December 28, please let me know so I can get it because I don’t want to have to go out again.  Nope, didn’t need a thing. I wondered how long it would be before we had to go out! Saturday morning! First thing Saturday morning:

Vince: I wish I had asked you to get stuff to make hot dogs.
Me: We’ll go to the store again towards the end of next week.
Vince: I really want a hot dog.
Me: We can go to Sonic.
Vince: No . . I want to make hot dogs at home.
Me: But we can’t . . we have no wieners.

Before the day was over, we went to the grocery store. Kroger had Angus Rib Roasts on sale and even though I had already bought one, I wanted another. I love prime rib and cooked at home is the best . . at least the best I can get around here. 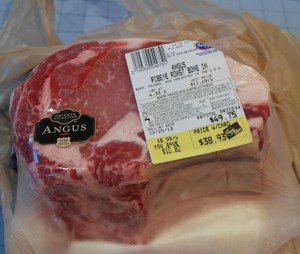 Vince was doing his usual up and down every aisle shopping so I headed back to the meat department. They only had one roast out and it didn’t have much marbling so I asked the meat guy if they had more. He told me he would have to cut some and off he went. In the meantime, a lady, holding the one rib roast, walked up. By now, Vince is back.

Lady: Have you seen the meat guy?
Me: He went to cut some more rib roasts.
Lady: Are you getting one?
Me: Yes, I just wanted one with more marbling.
Lady: I need a larger one. Do you know how many this will serve?
Me: Typically, you figure two people per rib but if you have big eaters, add a few ribs.
Lady: How do you cook it?
Me: We like ours medium rare so we season it and cook at 500º for about 5 minutes per pound, then leave it in the oven with the oven off for about an hour and a half.

She repeated all that to me. I explained that I wasn’t sure how this would work if she was getting a really big roast . . I usually cook one with 2 or 3 ribs. 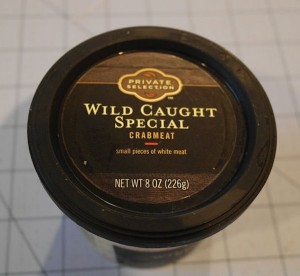 Then Vince and I walked off and I decided I’d do what I said I would never do and buy some frozen shrimp because Christmas Eve just isn’t Christmas Eve without shrimp gumbo. I got the shrimp, grabbed a tub of crabmeat and here’s the same lady again.

Lady: Excuse me . . but what do you have in your hand?
Me: Crabmeat.
Lady: What are you going to do with that?
Me:  Make a gumbo?
Lady: Do you think it would be good for crabcakes?
Me:  I’ve never really made crabcakes so I can’t tell you.
Lady: So, you’re making gumbo??
Me: Yep!

As I quickly walked away, Vince said “What was that all about? I thought she was going to ask you to come to her house and cook!” I told him that I thought maybe we both look like we eat a lot of good food so we would be good ones to ask about cooking!