We do have a couple of you tube videos that Boots will watch but mostly he wants to be held so where ever I’m sitting is where he’s going to be. He sits on my lap but then when I try to work at the computer, that gets his attention and he jumps up there.

After a while, I moved from the computer to the sewing machine. I did click on one of his videos but as soon as he noticed I was sewing, he came over to help. 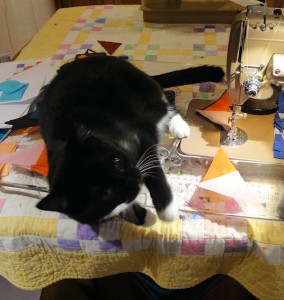 I would move him to the chair with me so I could sew. When I’d go iron, he would move over there. He is getting better. As I was ironing, he wanted to chew on the cord and I kept saying “NO!” He thought about it but he never grabbed it and I didn’t have to get the squirt bottle.

By the time I was finished sewing, he was a tired little boy. 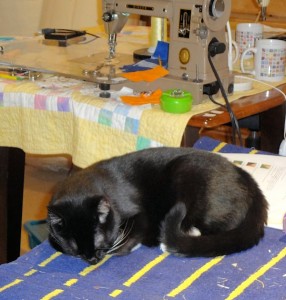 He’s probably happy for some alone time this evening.