Have you ever played around with a set of blocks just to see how they look in different settings? Since I use Electric Quilt for my quilts, I will usually try different layouts before deciding on a design.

When I’m designing a quilt, the first thing that will grab my attention is when a secondary design forms. The next most interesting layout for me is something set on point. I mostly work with simple blocks (some of you are beginning to believe me) that look like they were more difficult and it’s really easy to make simple blocks look more complex in an on point setting.

When I began working on my Blame Game quilt, I knew it was going to be set on point but the first blocks were set up on the design wall as a horizontal setting layout. 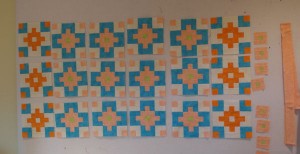 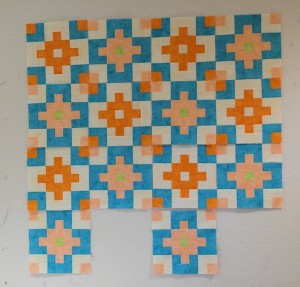 Then I changed the darker blocks to an alternate block setting and a bit of a secondary design appeared. 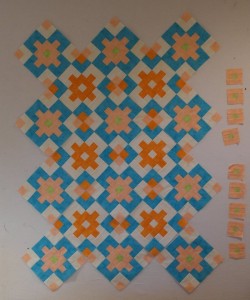 It was the on point setting that tickled my fancy! The secondary design pops and the darker blocks look like they have a purpose. 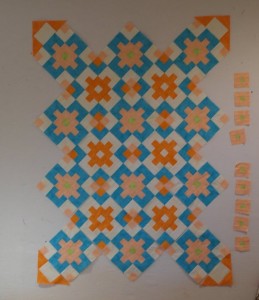 The corner blocks are made and that brings it to life even more.  Hopefully this week I’ll get the setting triangles made but I’m now working on the second one, which is Fit for a Hero so we’ll see if Blame Game gets finished this week.