When I went to search for my Iowa Chowder recipe Friday and realized the recipe I had posted online was gone, and that I had given my printed copy to someone else, I started typing an email to Darlene, who had given me the recipe. Since I wanted the recipe NOW to make for dinner, I wasn’t sure when Darlene would see it and get back to me and it was about that moment that I remembered Way Back Machine and was able to find it there.

Shortly after posting the recipe, I began to receive emails from several of her guild members letting me know that Darlene had been diagnosed with cancer in March, 2013, had mostly been in hospitals and rehab facilities since and had passed away in September. That news hit me hard . . mostly because there was so little time between the time she got sick and the time she passed away.  She was home very little.  Like so many of us, she had a nice sewing room with fabric and sewing machines and I can imagine that she sewed all the time and then began feeling bad and maybe a little worse, went to the doctor and by that time, she never really had a chance to do much else as far as “normal” activities.

Darlene had a wonderful family — a funny husband, two sons, a daughter-in-law and a grandson.  In the few days I was in her home, she showed me pictures, talked about her sons, daughter-in-law and grandson so that I felt like I knew them by the time I left.  She was just a wonderful lady – a mom, wife, grandma, quilter, baker . . someone just like most of us, and her life ended much too soon.

It made me think about my own life. We never know what tomorrow holds. When my time comes to go, I want to leave with no regrets and since we never know when that time is going to come, I try to live each day knowing that I’ve done the best I could with the circumstances I have.  Since receiving the news, I’ve spent most of the weekend . . not dwelling on death, but just thinking about how quickly things can change and re-evaluating some of my priorities. The news was kind of a punch in the gut . . maybe a wake up call of sorts.

So as not to end this post on a down note . . Jan from St. Louis told me that Darlene had written an article for American Quilter and it was published in the July, 2013 issue.  I think it was Friday when she told that. I wondered why I hadn’t read the article because I get American Quilter and usually go through it cover to cover.

I keep a magazine and a sock knitting project in each of our vehicles so that if we’re out and Vince decides to go on a marathon shopping trip, if it isn’t too hot, I’ll sit in the car and knit and if it is too hot, I’ll grab the magazine and find a place inside to sit and read. I guess after all these years he didn’t realize that I do that because at the beginning of the week he was cleaning out the Honda and he brought both the knitting project and the magazine in the house and said “I found this in the car.  Did you know it was missing?”  I explained the reason they were in there and told him I would put the socks back in there but I would leave the magazine in the house because for the next few months, it would be cool enough to sit in the car and knit if I found myself not wanting to go in and shop.

Last night, we were getting ready to go to bed.  Vince was in the shower and I was putting my knitting away for the night.  The magazine he had brought in was sitting on the end table and I keep putting the laptop on top of it.  I had not even looked at it.  Just as I was sitting the laptop on the magazine last night, it hit me . . I knew that if I looked at that magazine, it was going to be the July issue of American Quilter. 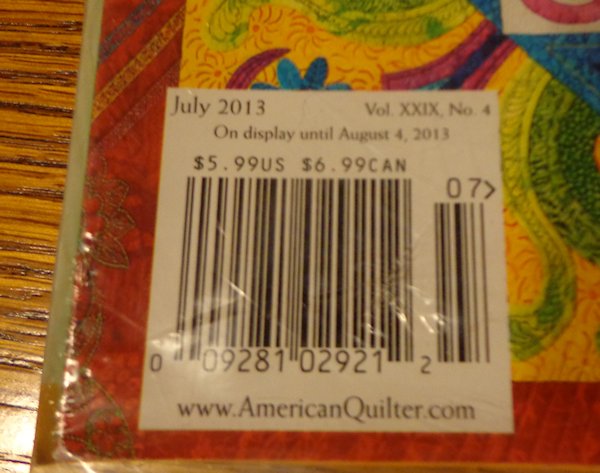 I almost didn’t even want to look because it was such a weird feeling that had just come over me thinking about how that issue had just been brought in the house and then I’d heard about Darlene’s passing and there was the issue .. still wrapped in plastic and not even opened. 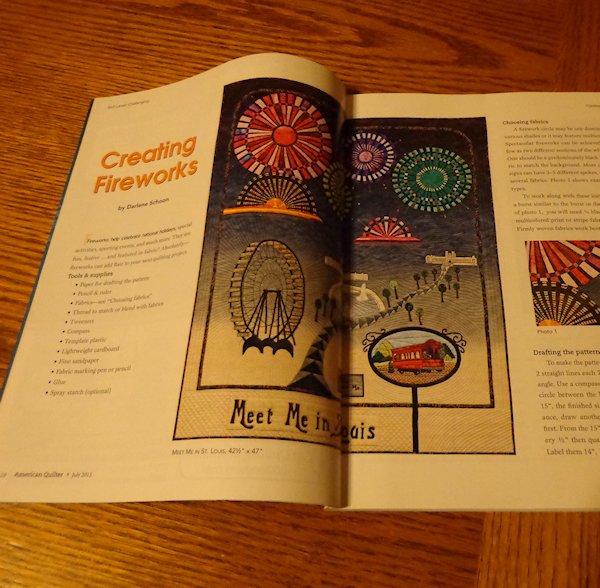 Darlene’s quilt in American Quilter is named “Meet Me in St. Louis.”  I’m very glad I had the opportunity to meet Darlene . . in St. Louis.