Tatting is something that’s always intrigued me.  I’ve tried doing it several times with several friends who tried to show me but I was never committed enough to learning I suppose . . because I never quite got it.  I’m a big fan of Craftsy classes. I love that I can watch the videos over and over again, or if there’s something I just don’t quite get, I can replay that section til I get it . . without others in the class looking at me like  . . what’s wrong with you??  The first Craftsy class I took was the Rigid Heddle Weaving class. The loom had been purchased while we lived in MO and before I became totally familiar with the loom, it was packed and we moved.  It stayed packed for a couple of years and when I got it out again, I didn’t have a clue what to do — how to put it together, how to “load” it or how to weave so out of desperation, I signed up for the Craftsy class and it was amazing!  It was just what I needed – no driving to classes, no trying to remember everything til I could get home and do it on my own.  At that point, I was sold on the Craftsy classes.

The classes are reasonably priced – by the time I drove to a nearby (2+ hours) city, ate lunch out, drove home, and paid for a class to be taken in real life, I’d spend four or five times what the Craftsy classes cost.  Granted, I love supporting “local” shops but sometimes, especially living this far from a city, Craftsy is a great opportunity for me.

So . . minding my own business as always and a friend and I were talking and she said she had an old tatting shuttle (except she called it a “tatter”) and it got me to thinking how many times I’ve tried tatting and then I remembered having seen a tatting class at Craftsy. 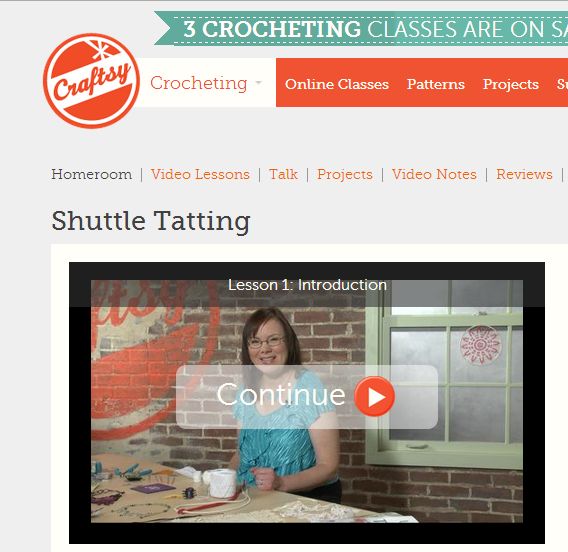 I went straight there and signed up.  Then I went to Handy Hands, found a shuttle or two, some thread, placed an order and now I wait for the mail lady to bring my supplies so I can begin my tatting classes.  I have an old tatting shuttle but who knows where it is so I ordered one of the inexpensive Starlit shuttles.