The yarn reports are tempting me to be dishonest. You know . . who would know if I didn’t tell the truth?  Me . . I would know . . and that should matter but at this point, it almost doesn’t!  🙁  And . . if I had knitted just a little longer, I would have another skein to add to the used category but . . I didn’t . . and I don’t!

In the added category: 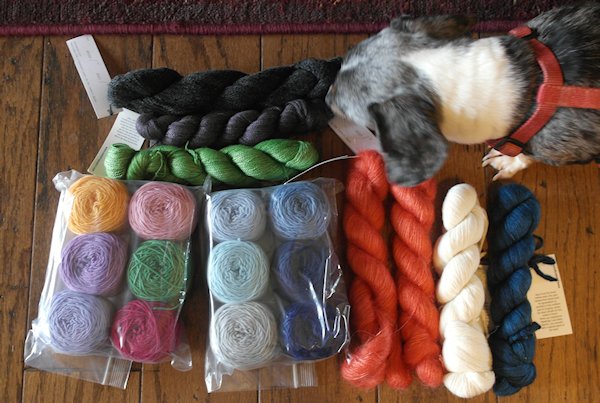 There are two packs of Loopy Cakes to be used for clothes for the rabbits (which I haven’t made yet) so that’s 12 skeins.  They’re small skeins and I’m always tempted to count several as 1 but when I use one up, I’ll count it as 1 so I’m counting them as individual skeins.

Shibui Silk Cloud in Poppy to make 100 Diamonds.  That’s 2 skeins.  You know something weird?  Denise has the same exact color of the same exact yarn to make the same exact pattern and we didn’t discuss this beforehand.  She’s so weird!  🙂

Malabrigo Silk Paca in Pearl Ten and Sapphire green and Shibui Pebbles in Abyss because I was afraid I was going to run short on the yarns already ordered for Art Eco.  That’s 3 skeins.

And, one old dachshund checking it all out.